Ducks are birds. Ducks are also called "waterfowl" because they usually occur in places where there is water, such as water. In ponds, streams and rivers. Ducks are related to geese and swans. Ducks are sometimes confused with different species of related waterbirds with similar forms, e.g. For example, grebes (a water bird found in many parts of North America and Northern Europe) or grebes (freshwater diving birds) and coots (medium sized waterfowl) members of the Rail Bird family).

Ducks are smaller than their relatives (swans and geese). Ducks also have shorter necks and wings and a strong body.

A female duck is called a hen. They are recognizable by their very dull, brown feathers. The females have dull brown feathers so they can hide from predators and predators. They can also camouflage themselves in their nests and protect their young.

A male duck is called a "Drake". They recognize the male duck by the colorful feathers. With these colorful feathers they attract the female ducks to mating. Here is a beautifully dyed drake with a purple plumage, a glossy green head color, a silver-white body, and gray wings with blue markings. 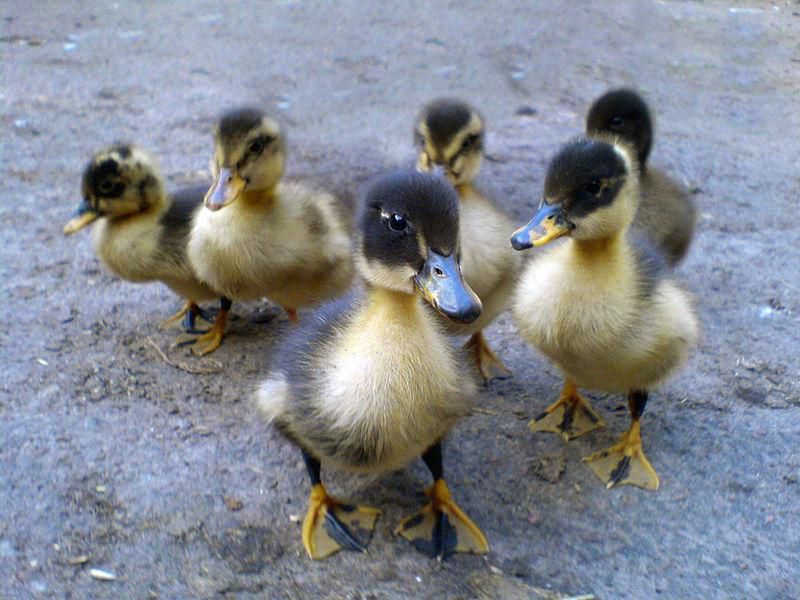 Ducks have webbed skins intended for swimming. Their webbeds look like paddles for the ducks. The reason why ducks can swim in cold water is their amazing circulatory system. Their blood vessels are arranged very close together in their legs and feet, so that the warm and the cool blood can exchange heat. This allows the warm blood flowing from the body into the feet to warm the cooler blood that flows back from the feet into the body, and the blood flowing to the feet is sufficiently cooled so that the cold does not engulf the duck disturbs. So the duck feet tolerate the cold and do not disturb them. All birds have this circulatory system in their legs and feet.

A duck has waterproof feathers. Near the duck's tail there is a special gland, the so-called "Preen Gland". This tiny gland produces oil with which the duck covers its feathers.

The duck picks up the oil with the head and the beak and then lubricates it all over the body to waterproof the outer feathers. Without this protective barrier, duck feathers would fill with water, and since they spend their entire lives in and around water, this waterproof barrier is extremely important. Under the waterproof coat are fluffy and soft feathers that keep the duck warm.

The duck's mouth is called beak or beak. It is usually wide and flat with fine notches along the edge called "lamellae". The fins help the duck hold the food so it does not slip off.

Duckbill is available in different shapes and sizes. The shape of the beak and the body determines how the duck hunts for food. 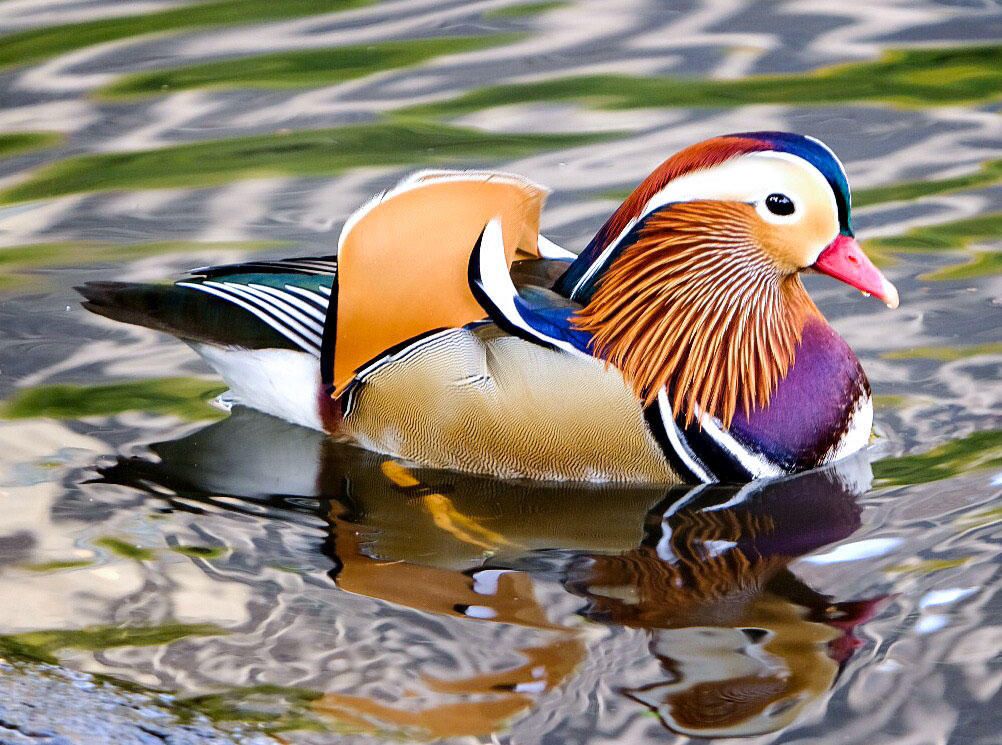 Ducks stay clean by cleaning themselves. Ducks do this by putting their heads in funny positions and sticking their beaks in their bodies. Ducks clean very often. Cleaning also removes parasites, scales covering new sprouting feathers, and removing sprouting oil via clean feathers.

Many species of ducks are temporarily flightless during the moult. Ducks are looking for sheltered habitats with good food supplies. They usually shed skin before migration.

Ducks are found in wetlands, swamps, ponds, rivers, lakes and oceans. That's because ducks love the water. Some types of duck migrate or travel long distances each year to breed. Ducks usually travel to warmer areas or areas where the water does not freeze so they can rest and raise their young. The distance can be thousands of miles away. Ducks are found all over the world, with the exception of the Antarctic, which is too cold for them. 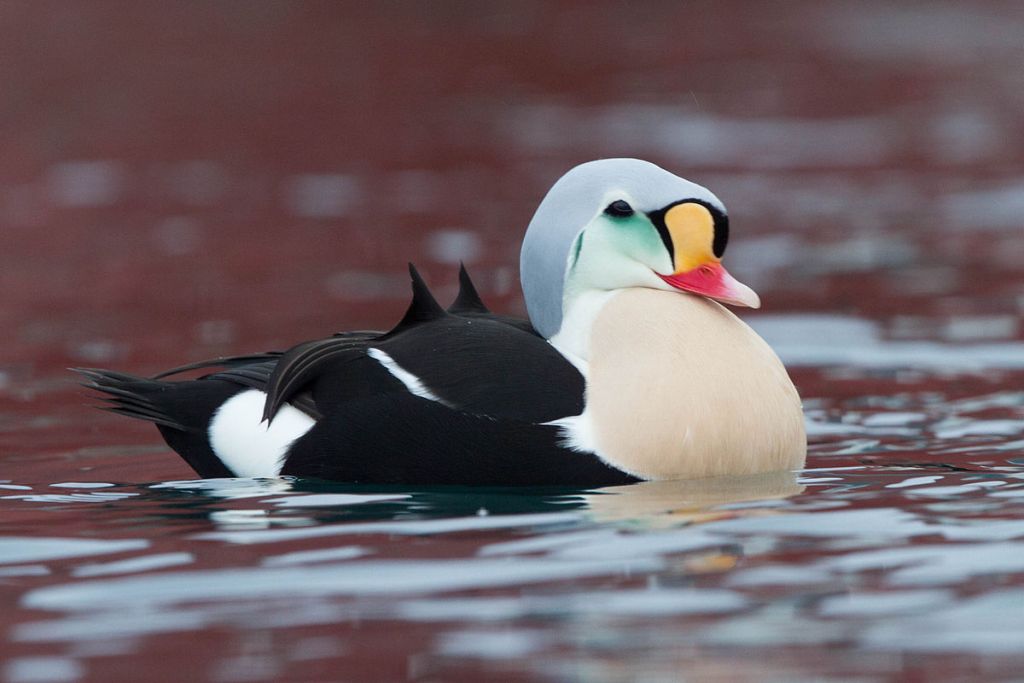 Ducks can be between 2 and 20 years old, depending on their species and whether they are wild ducks or ducks in captivity. It is a fact that a wild duck can live 20 years or more. Domestic ducks usually live in captivity for 10 to 15 years. The world record is a Mallard Drake who has reached the age of 27 years.

Ducks and their food habits

Schaufler - these ducks have wide beaks and seven their food for insects, nails and seeds from the mud.

Divers and sea ducks are looking deep under water. To dive easier, the diving ducks are heavier than planter and therefore have greater difficulty lifting to fly. These ducks have long and narrow beaks. Their narrow beaks are also covered with saw-like edges that help them catch fish.

Dulking ducks feed on the water surface or on land or as deep as they can be reached by moving up without completely submerging. Her beaks are wide and short. Dabbling ducks have tiny rows of plates on the inside of the beak, which are called "slats", like a whale. These have them filter out water from the side of their beaks and keep food inside. Dabbling ducks eat plants, seeds, grasses and other small insects and animals that they find on or under water. Usually, they stick their tails in the air and stick their heads in the water to get their food.

Dabblers usually have shiny colored spots on their wings. The local ducks are also complainers. They are descendants of mallards. Dabbling ducks take off in fast jumps from the water. Ducks with a longer neck dive their head into the shallow water and pick up their food. 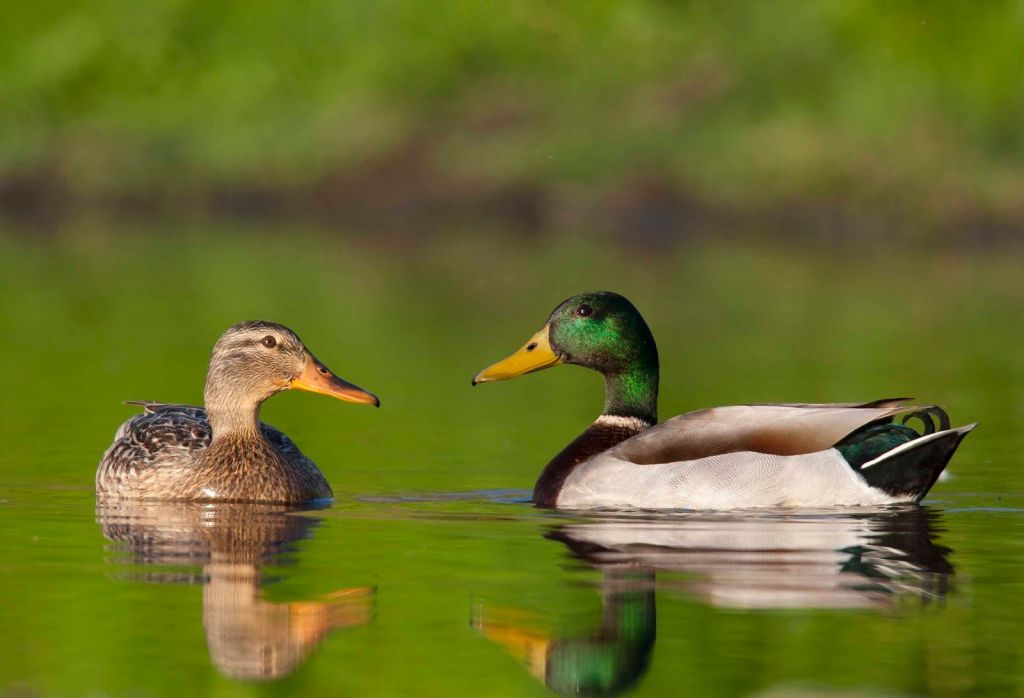 The male duck guards her territory by chasing away other couples. Once the female lays 5 - 12 eggs, she sits on the eggs to keep them warm so they can hatch to ducklings. The male ducks, on the other hand, will be with the other male ducks.

The eggs usually hatch within 28 days, with the exception of the flying duck, whose hatching takes about 35 days. The mother duck holds her duck brood together to protect her from predators. Animals like the raccoon, turtles, hawks, big fish and snakes are the duck's most important predators and eat the ducklings. Ducklings can fly within 5 to 8 weeks. Their feathers develop very fast.

When the boys are ready to fly, all ducks gather in swarms along large lakes, swamps or in the sea to move into their winter quarters. When the ducks fly, they usually do so in a "V-shaped" or long row.