Why Does My Dog Burrow Under The Covers? 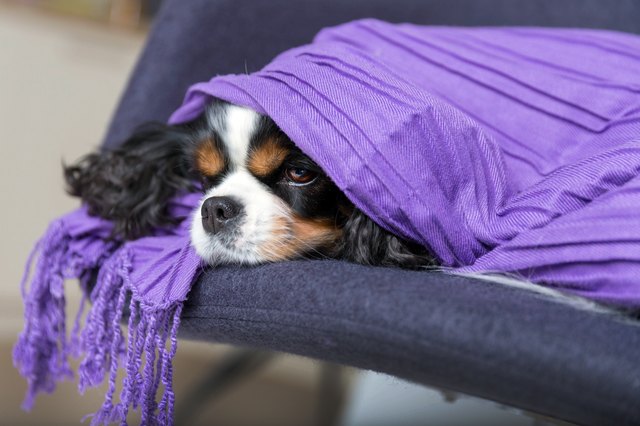 If you share a home with a dog, you may have noticed him pawing around or crawling under a blanket just before he shuts his eyes to sleep. Most of the time this behavior is considered cute, while other times, it may just be an unwanted distraction that's keeping you from getting your sleep.

This seemingly over-the-top bedtime ritual is common among many dogs thanks to the DNA they still carry from their outside-dwelling ancestors. But why, exactly, do dogs like to burrow under blankets and covers?

One reason your dog may be burrowing into your blankets is that she's seeking a safe sanctuary. Before dogs were domesticated they lived outdoors and made their homes out of dens: cozy, hidden holes that they could crawl into and sleep in safely. Today, most dogs who live indoors act on this same desire to crawl into their homes and nest even though their exact housing circumstances have changed. I Heart Dogs explains that staying under a cloak of blankets may help your dog feel protected, allowing her to relax, just as she would under the cover of a den outside.

If she's burrowing into blankets on a surface the two of you share, she could also be acting on a natural pack instinct. In the wild, dogs rely on the other members of their pack for a number of things, one of the most important being safety.

While not all dogs enjoy sleeping with their owners, those that do prefer it may be acting on a deeply-rooted need to feel safe and secure. According to a 2014 study00090-2/fulltext) published in the Journal of Veterinary Behavior, dogs who were covered in a ThunderShirt exhibited fewer symptoms of anxiety than those who were not. If your dog is anxious or nervous, especially around loud noises like thunderstorms or fireworks, seeking shelter underneath your sheets may be her way of hiding out somewhere familiar, which feels especially comforting when you're there too.

Even though many ancient canine instincts are still hard-wired into dogs today, not every dog will burrow, but many can't seem to shake the gene. Some breeds, like terriers, are known for their dirt-digging ways, which are sometimes still used to assist their human counterparts in rounding up vermin like rats or hunting foxes for sport. Daily Puppy states that dachshunds are also skillful burrowers thanks to their long bodies, short legs, and pointy faces, all of which create the perfect digging machine.

While not every dog is prone to burrowing, many have their own resting rituals, which often include other instinctual behaviors, like circling before lying down and scratching at the ground. Dogster says that circling and scratching are not done with the destruction of our carpets and couches in mind, however. Instead, these behaviors establish a secure spot for your dog to sleep by marking the area with his scent, a technique inherited from his ancestors. Dogs will also scratch, circle, and dig to build shallow nests, which can help them regulate their body temperature by keeping them cool on hot days, and warm on cold ones.

Is it safe for dogs to burrow under the covers?

Allowing your dog to burrow in or sleep under blankets is safe, as long as you take a few basic safety measures to reduce the risk of injury. First and foremost, allow your dog to have the agency she needs to remove herself from the situation should things start to get uncomfortable. Most healthy dogs can thermoregulate, meaning if they get too hot, they remove themselves and relocate to a more comfortable setting. As long as your dog has an easy exit route from her blanket fort, and the blanket is made of a breathable material, she should be fine. Don't let your dog sleep under an electric blanket, as there's a risk of the blanket becoming too hot too quickly. 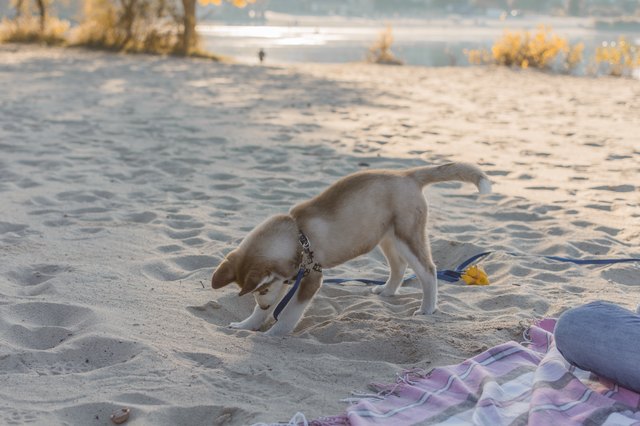 If you have a flat-faced dog, like a pug or an English bulldog, or if your dog has respiratory issues, you should keep a close eye on them under blankets in case issues of heat exhaustion arise. Noah's Ark Veterinary Hospital lists panting, difficulty breathing, drooling, a rapid pulse, and lethargy as some common signs of heat exhaustion. If you notice your dog exhibiting these symptoms from under a blanket, remove the blanket immediately, cool them down by applying cool, not cold, water to their fur, paws, and ears, and contact your veterinarian immediately.