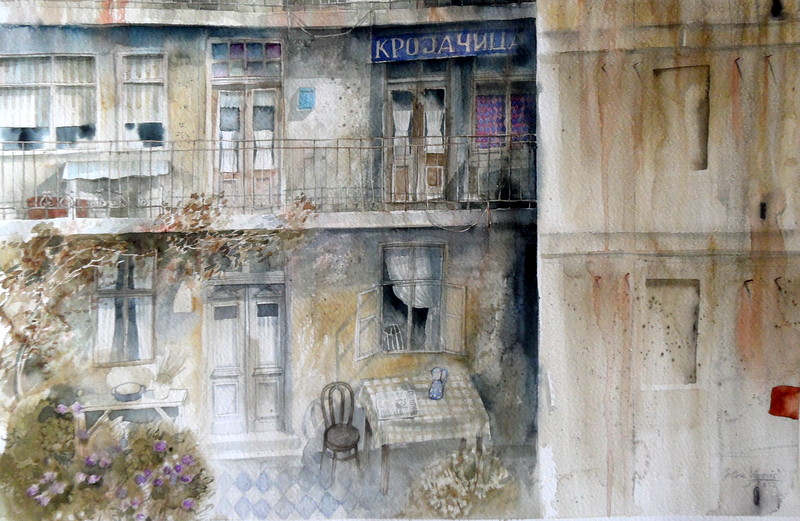 Vujovic has participated in over 50 group exhibitions of watercolor artists in Serbia and internationally, including shows in London, Delhi and Mexico City. She has taken part in several workshops and has won prizes for her watercolors and illustrations. She has also had about a dozen individual exhibitions of her watercolors, most notably “Belgrade Through Gates and Entrances”, “Memories”, “Forgotten Scenes”, as well as her latest exhibition in 2008 “Reflections”.

In today’s modern world where global progress changes the faces of its cities, when in the very centre of old Belgrade, old family houses disappear, only to be replaced with modern skyscrapers, the watercolors of Silva Vujovic fight the unrelenting collapse of many picturesque facades, gates and backyards. The details, which many passers-by don’t even notice, or are indifferent to, are the main themes of her watercolors.

Vujovic’s work awakens in us the memories of our childhood, of a life and ambient that is forever changed. Behind every weary fence, window, or door in her watercolors is hidden someone’s life story, full of events and memories. They make us wonder what happened to those who once live there, or still do. We wonder and we move on, and a painter like Silva finds in these places a new inspiration to preserve them for the future with her keen eye and brush. She paints the remnants of our times and events, just like life paints lines on the faces of their inhabitants.

We must not forget the interior work that Silva Vujovic frequently uses as a successful theme. They, of course, come from the same place of her artistic imagination – rooms with vintage sofas, milieus and faded photographs on the wall, holiday memories, all that is hidden behind the old walls, windows and doors – like a sequel to the same story.

Silva has brought the watercolor technique to a point of perfection. Her personal and recognizable way of painting, the precise lines and drawings laid upon mostly monochrome surfaces create a sense of unity between them. The light and shadow ratio makes the objects dynamic and interesting, soft and transparent colours render them velvety and unobtrusive. Carefully selected details bring to Silva’s paintings the impression of plausibility and abundance, and can easily remind the observer of some forgotten memory or a story from the past.