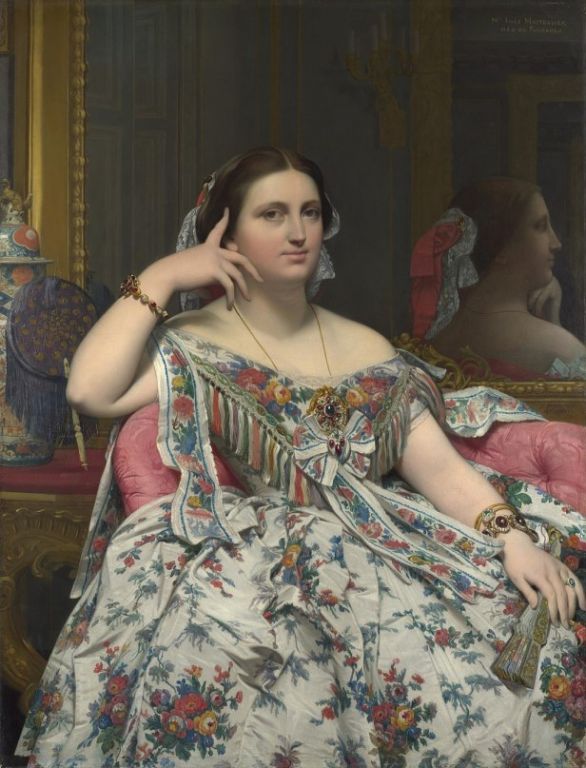 Madame Moitessier by Jean-Auguste-Dominique Ingres is a portrait of Marie-Clotilde-Inès Moitessier (née de Foucauld), begun in 1844 and completed only twelve years later. Madame Moitessier (1821-1897) was the daughter of a French official who married a wealthy banker and merchant twice her age and a widower. In this painting, she wears abundant jewelry and wears an elegant silk dress with a floral pattern, which is reproduced by the flowers and leaves of the mirror with gold frame. Madame Moitessier is framed on both sides by mirrors, and her profile reflection can be seen on the mirror to the right.

Ingres, who was at the peak of his career in the 1840s, was reluctant to accept this portrait order and turned down her husband's request for a portrait of his wife. However, when Ingres met Madame Moitessier, he was impressed by her beauty and agreed to produce a portrait. The completion of the painting took twelve years, as many interruptions in the life of the artist and the subject occurred. The work on this canvas was discontinued when Ingres' wife was unable to work for many months. Later, Madame Moitessier was no longer available due to a pregnancy and the death of her father. More than seven years later, Ingres began anew and painted another portrait of the subject in which she was standing in a dark dress. The standing picture is in the National Gallery of Art in Washington, DC, showing Madame Moitessier looking much more solemn. Ingres then returned to his first composition of this seat portrait, which he completed in 1856. This sitting portrait shows a smiling Madame Moitessier, compared to the standing portrait in black dress it is a much sober portrait.

Ingres was a French classicist painter who considered himself a painter of history and who is today highly esteemed for his many portraits. Critics often found his style bizarre and archaic, his expressive distortions of form and space made him an important forerunner of modern art, and his work influenced Picasso and Matisse as well as other modernists.