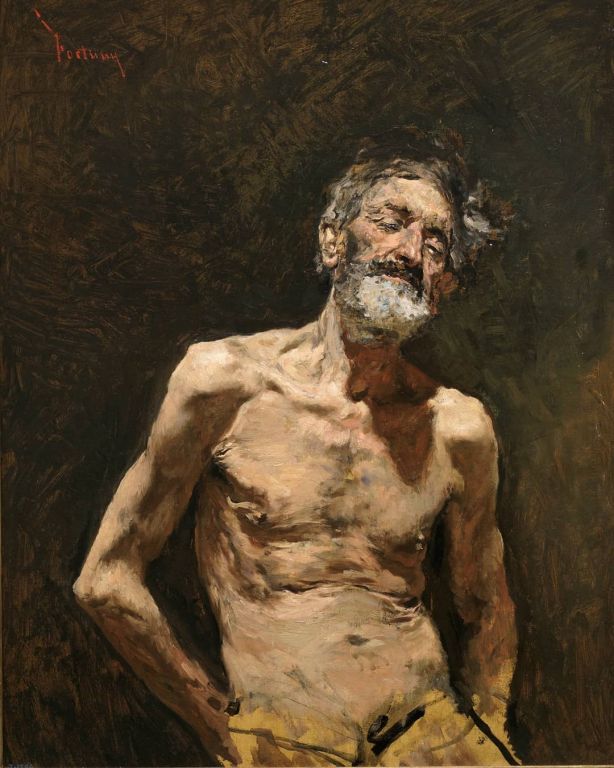 Fortuny was one of the most diverse and commercially successful artists of his time. He became famous for his genre motifs, which were characterized by lightness of touch and were inspired by loose works by artists like Watteau and the colorful palette of Venetian artists like Tiepolo. 'Nude Old Man in the Sun' shows Fortuny's familiarity with the work of Jusepe de Ribera, whose painting Saint Andrew had copied on a previous occasion. In this painting, the artist is interested only in the upper part of the figure.

The work was carried out during a stay in Granada outdoors and is a study. It was called a study when it was shown at the 1878 Paris World's Fair. One critic described her as a stunning anatomical study.
As is often the case in Fortuny's paintings, especially in his studies, the work displays different degrees of completion in different zones of the painted surface. The lower part is only sketched out, with large color spots and long, loose brushstrokes showing the preparation of the canvas underneath.
The artist was interested in studying the light appropriately, which led to dramatic contrasts between light and shadow in the upper part of the screen. The old man's beard is bluish and gives a sense of Fortune's acute powers of observation.
The raised face of the figure with half-closed eyes against the sun emphasizes the feeling of carelessness; His retreat into purely physical sensations is recorded here with extraordinary naturalness. (Museo del Prado)