The Ambassadors By Hans Holbein the Younger, Oil Painting 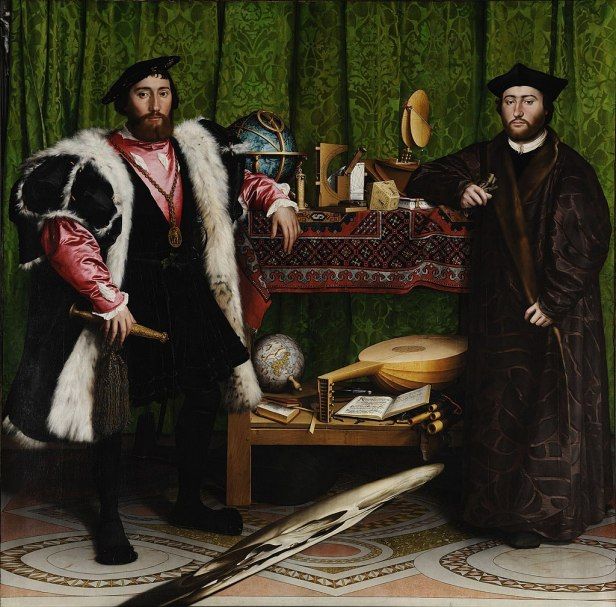 "The Ambassadors" by Hans Holbein the Younger is a masterpiece of great size, but very detailed and full of symbolism. This double portrait was made in the Tudor period in the same year that Elizabeth I was born. It shows two wealthy, educated and powerful men. On the left is Jean de Dinteville, French ambassador to England. To the right is Georges de Selve, Bishop of Lavaur, who has served on several occasions as ambassador to the Emperor, the Venetian Republic and the Holy See.

In the foreground is the distorted image of a skull, a classic Renaissance image with a universal message of human mortality. If this image is viewed from a point on the far right of the image, the distortion is corrected and the skull looks normal. Dinteville, who commissioned the picture and whose personal motto was "Remember that you should die," may have demanded that the hidden skull symbolize the inevitability of death.

This painting follows the traditional style of the time and shows the elite of society with books and the new instruments of science. Top shelf objects include a celestial sphere, a portable sundial, and various other devices used to understand the sky and measure time. The lower shelf contains a lute, a flute box, a hymn book, a computational book and a globe.

In the same year, this painting was created, there was considerable turbulence at the royal court. Henry's marriage to Catherine of Aragon is annulled. Henry VIII. Married Anne Boleyn. Cranmer agrees with Henry's marriage to Anne. The pope explains Henry and Cranmer excommunicated. Anne Boleyn is crowned Queen. Anne gives birth to Elizabeth, the future queen.