The Lightship at Skagen Reef by Carl Locher, Oil Painting 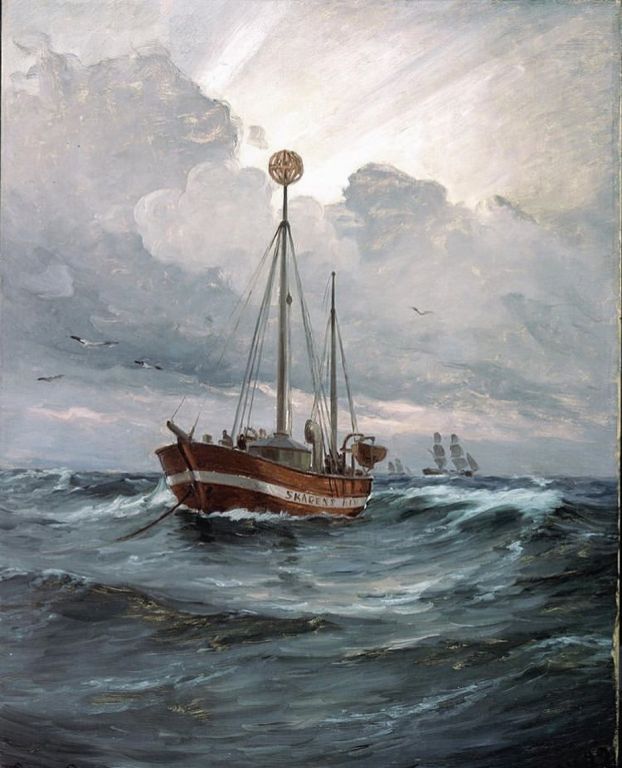 This painting is Carl Locher’s second contribution to the decoration of the Brøndum’s dining room. Locher’s father, Jens Thielsen Locher (1825-69) earned his living by painting ship portraits, a profession also practised by Locher in his penurious youth and very much against his will. In the picture, Skagen Reef lightship is placed almost in the centre on the horizon that divides the picture into two almost equal halves. The sea in the foreground is dark green and blue, and in the sky there are threatening dark grey clouds behind which the sun looks as though it could come out at any moment. The sails of two ships can be seen in the background. Lightships have existed since the 17th century, but it was only at the beginning of the 19th century that they were placed in permanent positions. A lightship was equipped with a lighthouse lantern at the top of a solid mast, and they were anchored in a permanent position.
Skagen Reef extends four kilometres east north east as a natural extension of the Skaw Spit.The Danish lightships were red with a white cross or a white band on which the ships position was noted. Denmark has had 25 lightships altogether, all of which were functioning in the period 1828-1988. There was a lightship on Skagen Reef from 1878 to 1980, but today lightships have been replaced by large light buoys. In addition to being a marine painting, Locher’s picture is also a document of cultural history, and it is interesting in relation to the Skagen painters because it is one of the rare paintings portraying modern developments in Skagen.