Who Is Freddie Mercury? 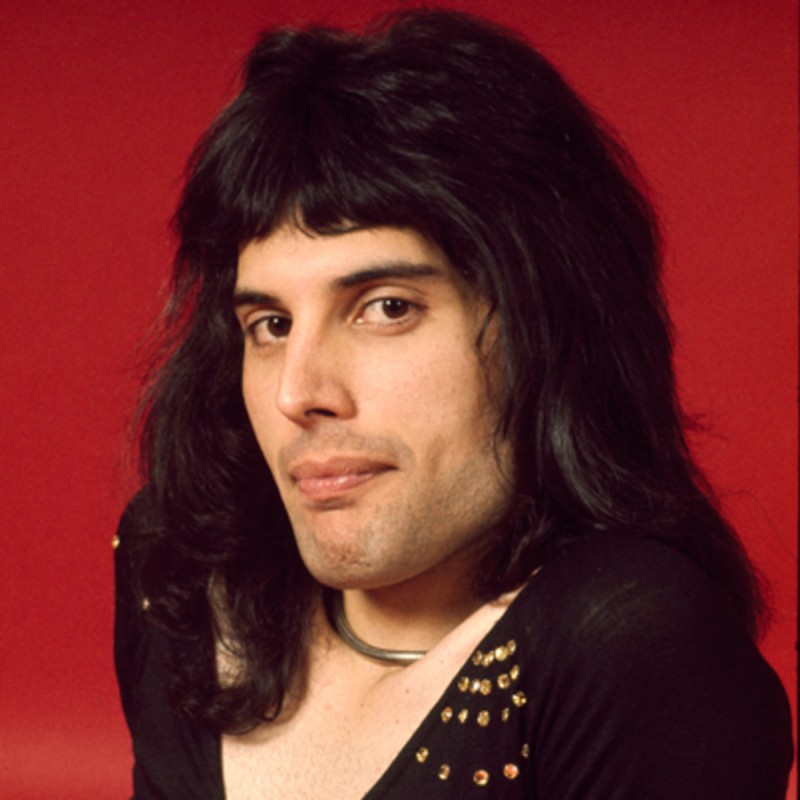 Freddie Mercury is best known as one of the rock world's most versatile and engaging performers and for his mock operatic masterpiece, "Bohemian Rhapsody."

Who Was Freddie Mercury?

Singer-songwriter Freddie Mercury was born Farrokh Bulsara on September 5, 1946, in Zanzibar, Tanzania. He studied piano in boarding school in India and befriended numerous musicians at London's Ealing College of Art. The music of Mercury's band, Queen, reached the top of U.S. and British charts. Mercury died of AIDS-related bronchial pneumonia on November 24, 1991, at age 45.

Singer-songwriter and musician Freddie Mercury was born Farrokh Bulsara on September 5, 1946, in Zanzibar, Tanzania. As the frontman of Queen, Freddie Mercury was one of the most talented and innovative singers of the rock era. He spent time in a boarding school in Bombay (now Mumbai), India, where he studied piano. It was not long before this charismatic young man joined his first band, the Hectics.

Moving to London with his family in the 1960s, Mercury attended the Ealing College of Art. He befriended a number of musicians around this time, including future bandmates, drummer Roger Taylor and guitarist Brian May. In 1969, Mercury joined up with a group called Ibex as their lead singer. He played with a few other bands before joining forces with Taylor and May. They met up with bassist John Deacon in 1971, and the quartet — who Mercury dubbed Queen — played their first gig together that June.

Mercury was born with four extra teeth in the back of his mouth, causing his now-famous bucktooth grin. In fact, his nickname growing up was Bucky. Mercury never got his teeth fixed because he was afraid it would ruin his vocals.

Queen Reigns: 'Bohemian Rhapsody,' 'We Are the Champions'

In 1973, the band released their first self-titled album, but it took two more recordings for Queen's music to really catch on. Their third record, Sheer Heart Attack (1974), featured their first hit, "Killer Queen," a song about a high-class call girl. The single hit No. 2 on the U.K. charts, and peaked at No. 12 in the U.S.

With a sound that has been described as a fusion of hard rock and glam rock, Queen had an even bigger hit the following year with their album, A Night at the Opera (1975). Mercury wrote the song "Bohemian Rhapsody," a seven-minute rock operetta, for the album. Overdubbing his voice, Mercury showed off his impressive four-octave vocal range on this innovative track. The song hit the top of the charts in Britain and became a Top 10 hit in the United States.

In addition to his talents as a singer and songwriter, Mercury was also a skilled showman. He knew how to entertain audiences and how to connect with them. He liked to wear costumes — often featuring skintight spandex — and strutted around the stage, encouraging fans to join in the fun. Artistic in nature, Mercury was also actively involved in designing the art for many of the group's albums.

Queen's popularity continued to soar through the late 70s and early 80s. "We Are the Champions," off of News of the World (1978), became a Top 10 hit in the United States and in Britain. It was featured on a single with "We Will Rock You" — both songs have taken on a life of their own as popular anthems played at sporting events. Always exploring new and different sounds, Queen also tried their hand at the big music trend of the time, with the disco-flavored "Another One Bites the Dust" in 1980. Off that same album, The Game (1980), Mercury and the rest of the band showed their range as performers with the rockabilly-influenced hit "Crazy Little Thing Called Love," which Mercury penned. 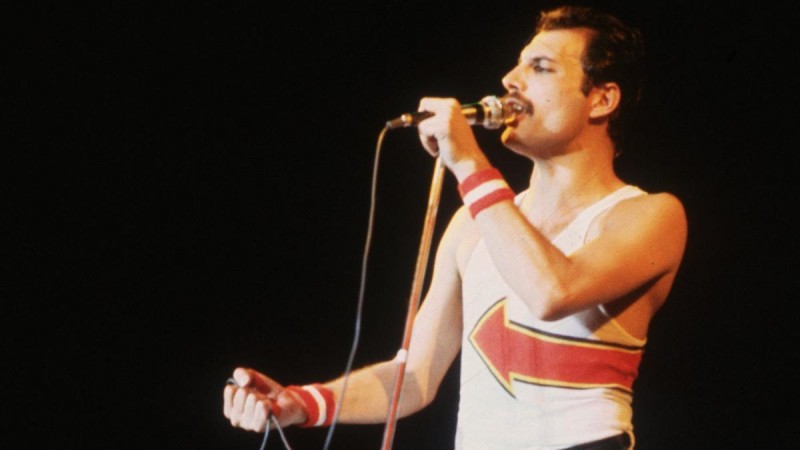 The following year, the members of Queen collaborated with David Bowie to create "Under Pressure." A No. 1 hit in Britain, the song's distinctive bass line was later reportedly used by Vanilla Ice for his 1990 rap hit "Ice, Ice Baby." The group's ability to sell albums began to wane by the mid-1980s after The Works (1984), which featured the minor hit "Radio Ga Ga."

As a live act, Queen continued to draw huge crowds around the world. One of their most notable performances was in 1985 at the Live Aid charity concert. Simply dressed in a tank top and jeans, Mercury led the crowd through some of the band's greatest hits with great energy and style. He got the thousands of music fans at London's Wembley Stadium to chant along to "We Will Rock You." For many who watched the event live or on television, Queen gave one of the top performances of the day-long event, which was organized by singer and activist Bob Geldof and songwriter Midge Ure to raise money for victims of famine in Africa. Inspired by the event, the band wrote the hit "One Vision."

Offstage, Mercury was open about his bisexuality, but he kept his relationships private. He also lived a lavish lifestyle. He loved champagne and liked to collect art, once spending more than $400,000 on a set of hand-painted china. Always one for a party, Mercury threw himself elaborate celebrations; for one particular birthday he flew a group of friends to the island of Ibiza. The occasion was marked by fireworks and flamenco dancing.

By 1989, Mercury largely retreated from public life. He did not promote or tour for Queen's next album, Innuendo (1991), and rumors about possible health problems began to circulate. On November 23, 1991, Mercury released a statement: "I wish to confirm that I have been tested HIV-positive and have AIDS. I felt it correct to keep this information private to date to protect the privacy of those around me. However, the time has come now for my friends and fans around the world to know the truth and I hope that everyone will join with my doctors and all those worldwide in the fight against this terrible disease." The next day, he died from AIDS-related bronchial pneumonia at his London mansion. Mercury was only 45 years old.

Longtime friend and bandmate Roger Taylor provided some insight to Mercury's decision to keep his battle with AIDS private. "He didn't want to be looked at as an object of pity and curiosity, and he didn't want circling vultures over his head," Taylor said, according to a report in Entertainment Weekly. The rock world mourned the loss of one of its most versatile and engaging performers.

To honor his memory, the Freddie Mercury Tribute: Concert for AIDS Awareness was held in April 1992 at Wembly Stadium. A diverse range of rock acts — from Def Leppard to Elton John — performed to celebrate Mercury and advance the fight against the disease that took his life. That same year, Mercury's mock operatic masterpiece, "Bohemian Rhapsody" made a return to the pop charts, illustrating its timeless appeal.

Before his death, Mercury had done some work in the studio with Queen. These efforts were released in 1995 on Made In Heaven, the group's last album with all the original members. Gone but clearly not forgotten, this collection of Mercury's final performances reached the top of the British charts. In 2001, Mercury and the rest of the band received special recognition for their contributions to American music history when they were inducted into the Rock and Roll Hall of Fame. 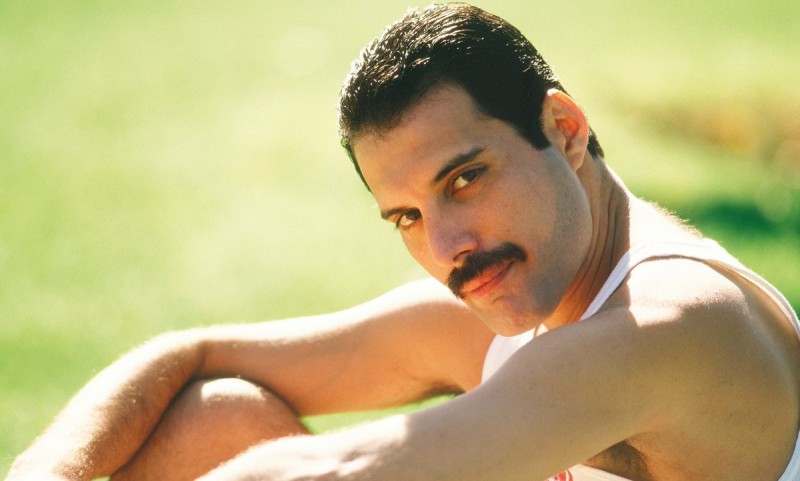