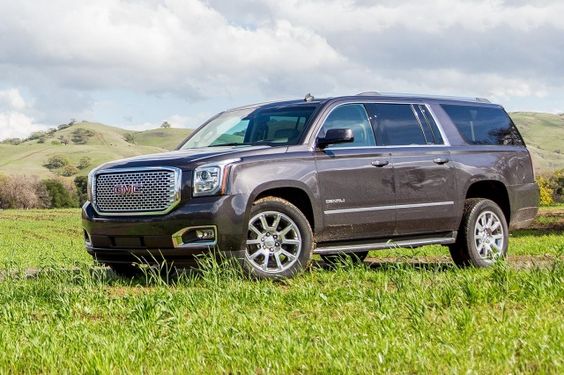 The GMC Yukon gets a total redesign for 2015. The new truck returns with better, more distinct styling, an improved and more spacious interior and a set of new, more efficient engines.

The GMC Yukon exists primarily as a people carrier, albeit a much more rugged one than any of the minivans that litter the road. With three rows of seating, powerful engines and a truck based chassis with good ground clearance, the Yukon excels at taking anyone anywhere. Its secondary mission is one of luxury, the Yukon can be outfitted with enough options to do a credible impersonation of a limousine if need be. Everything from sumptuous leather to state of the art rear-seat entertainment systems can be had on the GMC Yukon. Prices start at around $46,000.

The GMC Yukon comes in four basic trim combinations Yukon, Yukon XL, Yukon Denali and Yukon Denali XL. XL versions of the Yukon come with a longer wheelbase and more interior room, while Denali versions are packed full of luxury. Two new engines power the Yukon, a 5.3L V8 with 355 horsepower supplies power to Yukon and Yukon XL models, while a 6.2L V8 with 420 horsepower provides thrust for Denali and Denali XL versions. GMC claims that the new engines should provide best in class fuel economy with even the long wheelbase, larger engine Denali XL achieving 21 mpg on the highway.

The Yukon Denali and Denali XL come in just a single, all-encompassing trim level. The Denali comes with most of the luxury features that come with the SLT trim, however the Denali also includes a nicer sound system with active noise cancellation technology and magnetic ride control shock absorbers. The Denali also gets plenty of unique styling pieces on both the interior and exterior of the vehicle, helping to distinguish it from its less expensive sibling. Generally speaking, interior trim pieces are nicer, softer and more expensive feeling, while the exterior benefits from unique headlights, a unique grill and plenty of Denali badging.

Options on the Yukon are numerous. A variety of 22 and 20-inch wheels are available, allowing buyers to customize the exterior looks of the vehicle to their taste. Interiors can also be customized and one of the more popular options on the Yukon is a very nice rear seat entertainment system that includes a Blu-ray player. Electronic systems such as adaptive cruise control or a heads up display are also available, as is a panoramic sunroof.

Safety systems on the 2015 Yukon are state of the art. Electronic aids such as anti-lock brakes, traction control and stability all come standard. Optional blind spot warning can also aid on road safety. All Yukons also come with a 6-month subscription to GM's OnStar service