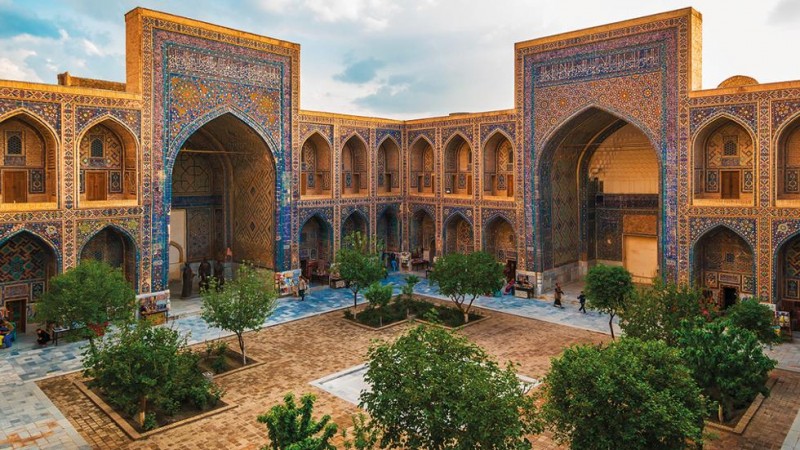 You want an illegitimate taxi?” asked the waiter, after my rousing meal of something delicious that may have been mutton. In truth, I’d have been more than happy with a legitimate one that first evening but – too late! – a passing Lada was flagged down and soon I was speeding back to my hotel driven by an Uzbek with a tremendous set of gold teeth and a surprisingly good grasp of English. ‘‘On average, the foreign traveller does not like our capital of Tashkent,’’ he observed with a tragic air, ‘‘because it is generally unlikeable.’’

I looked out of the window at the brutalist architecture of Uzbekistan’s Soviet era, the kitsch lamp posts, the formally laid-out parks lined with kidney-coloured kerbstones and the boutiques selling metallic bras, knocked up in the Seventies, you’re tempted to think, from leftover cosmonaut fabric. 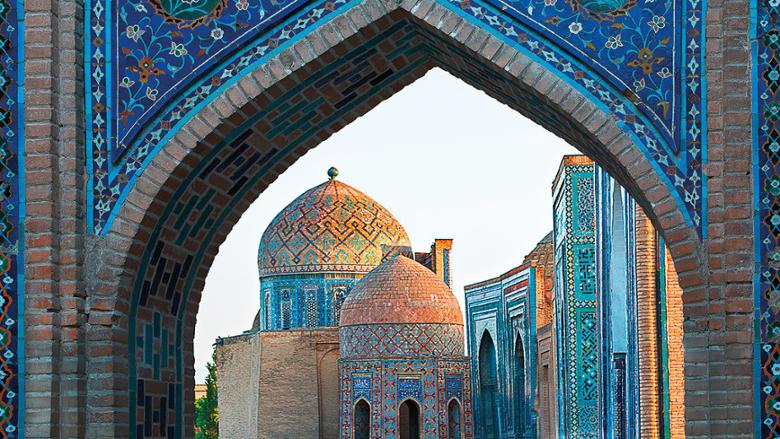 Actually, I was rather taken by this odd, rather out-of-kilter nexus of more-or-less modern times, rebuilt with ideological zeal by Leonid Brezhnev after the earthquake of 1966 and boasting a glorious metro along Moscow lines.

Especially likeable was the gigantic Chorsu Bazaar, where you might sip black tea while contemplating the magnificent hubbub – and whether to buy, say, a truckload of pistachio nuts or a goat’s head.

But my golden-toothed driver had a certain point: along the Silk Road there were perhaps even more precious jewels to be had and so it was that, first thing the next morning, I took the sleek blue train to Samarkand.

Off I went with rising excitement, zipping through the irrigated plains of cotton, and suddenly – almost too soon – found myself face-to-face with the most celebrated jewel of the lot. 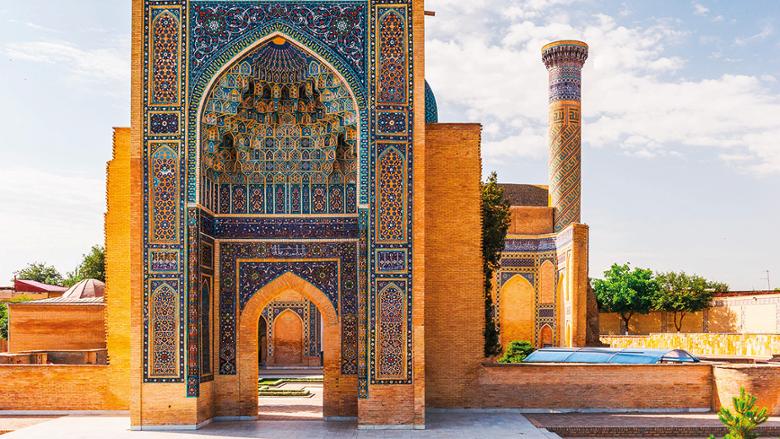 Nothing quite prepares the visitor for the splendour of the medieval square known as the Registan, its sheer scale and the audacious turquoise, sky blue and sea green tiling of its exquisite minarets and three madrassas. Here it was that traders used to unload their camels and that decrees were proclaimed by the great Emir Timur – the Tamburlaine of Christopher Marlowe fame – who swept through central Asia like Genghis Khan before him and made the city his capital.

‘‘Let he who doubts our power and munificence look upon our buildings,’’ Timur proclaimed in 1379. For though he was a conqueror very much in the tradition of Genghis, and thus responsible for perhaps another 15 million deaths, he was also a cultured man and enjoyed a good debate. He plundered cities from Damascus to Delhi not just for their riches, but for their artisans and intellectuals, whom he trussed up and brought home. 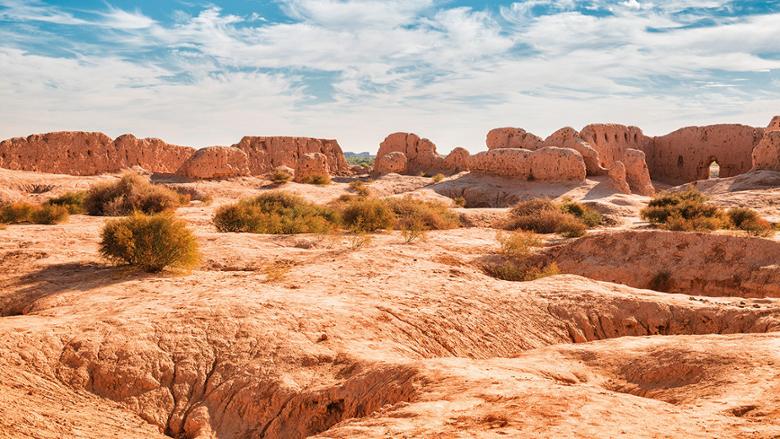 The ruins of the Kyzyl-Kala fortress

Thankfully, such is the rich and turbulent history of the Silk Road – not really a road, more an interlacing network of trading highways – that even the most overawed tourist needn’t feel out of place when gawping at the bright and intricate, somehow not-quite-clashing, tiles, or haggling with the good-natured vendors for caps embroidered in gold thread. Mullahs, merchants and warlords have long since fingered the silken scarves or surveyed the metalworkers bashing out delicate geometric designs, or just nabbed them before laying the rest to waste.

The Registan was so overwhelming, I decided to come back and admire it all over again under the full moon.

‘‘When you come back, I also give you my very special light show,’’ said an enthusiastic caretaker called Otabar, who wore the plain, communist-era suit favoured by even the more dapper type of Uzbek gentleman. ‘‘It is worth many money,’’ he added, hopefully. 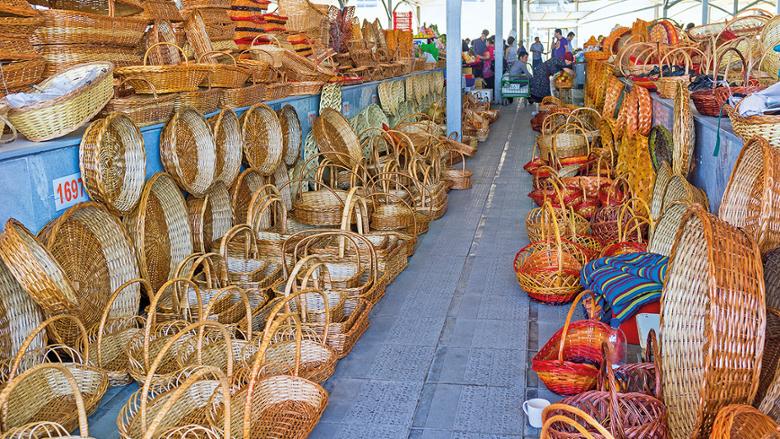 In the end, Otabar’s bill came to only 40,000 som, which is £4 (less than 20 dirhams), and although there was something of a disco about his special light show – before my eyes, one of the foremost wonders of the Islamic world

changed from an alarming orange to a gaudy violet and climaxed in putrid yellow – nothing could quite take from the glory which is Samarkand. Under Otabar’s watch I climbed the spiral stairs of a minaret – it had a worrying lean – and explored the cells where students of the madrassas once quietly worked.

Afterwards, Otabar beckoned me to his little back room and divided the round loaves of which Uzbeks are so rightly proud, and shared his meal of dahl and rice.

There is so very much more to enthuse about regarding Samarkand, notably the tombs of Shah-i-Zinda, but not forgetting Gur-i Amir, which is effectively the necropolis of the Timurid dynasty and features the modest, jade-capped grave of Timur himself, and a heavenly ceiling that – exquisite even in dull light – gives you the impression of being inside a giant golden flower capsule, the pollen everywhere raining down.

‘‘He is our hero,’’ a scarfed young lady said to me, simply.

Another favourite was the observatory of Timur’s grandson, the mathematician ruler Ulugh Beg, who prioritised astronomy over running the empire (fast falling apart), and whose observations of the stars wouldn’t be bettered until the advent of the computer. But, for me, the most thought-provoking site of all was an unlikely patch of ground well away from the domes and minarets. Once, this scrubland had been Afrosiab, a city known to Alexander the Great and described by a contemporary as the most beautiful in the world. 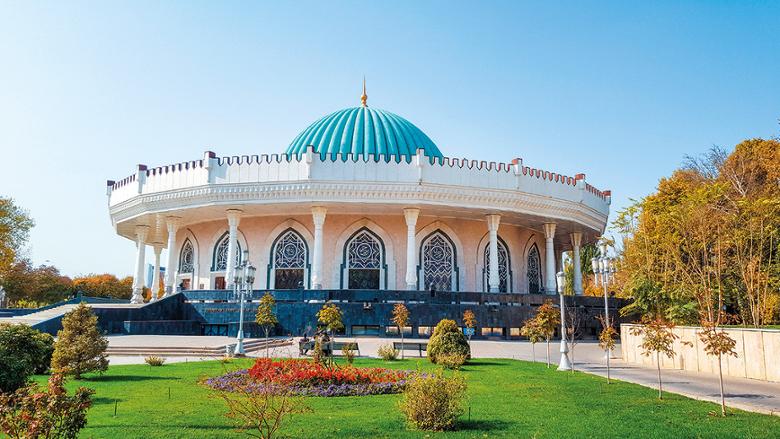 Not any more. There was no breathtaking citadel, there were no pleasure gardens, just divots in the ground where archaeologists had scratched about, looking for traces of what had been. The nearby museum, though, displayed a fabulous mural that was discovered when the authorities decided to put a road through, and here you might witness a funeral procession, a hunting scene and a Chinese empress aboard a boat, all this pointing to the respect accorded a neighbouring regime even as far back as the seventh century.

Today, little else remains but the occasional plastic bag snagged by a resilient weed.

The whole place was levelled by the Mongol invaders of 1220, and by the time Genghis Khan was done the irrigation channels were, it’s said, running with blood.

Here, 100,000 died miserably, but it was just such conquests that put an end to Islamic hegemony and made possible a thoroughfare between east and west. Next there came the Pax Mongolica, which opened the entire central strip of Asia to Europe.

But the Silk Road is about more than the architectural wonders of the civilised world – the celebrated gems that are Samarkand, Khiva, Bukhara and more. It’s about the spaces in between. So I hired a guide and another Lada and travelled on west through Uzbekistan to the Nurata mountains, where live the ethnic Tajiks, who have green eyes and claim direct descendance from Alexander.

For several nights I stayed at guesthouses while slowly walking the Hayat valley – parting the goat flocks, watching mothers with their children gathering nuts and dusting down the shards.

While steppe eagles spiralled overhead, old men sat cross-legged with me beneath walnut and mulberry trees, offered plates of apricots and raisins, and talked of the wolves that cunningly separated off the fatter sheep to keep as their larder.

These were lovely, peaceful days, a fine counterpart to the hustle and bustle of the more famous sites. I listened to the nuts falling on tin roofs, with perfect strangers drank solemn toasts to friendship, and one day was guided

higher through the hills by a young school teacher called Rajahgal who was so determined to make use of this rare chance to practise her English that she came along wearing what my mother would have called ‘‘inappropriate’’ footwear. These were black shiny dance shoes, which at least matched her gold-studded handbag and in fact proved the least of her worries.

‘‘I did not climb this mountain before,’’ she wheezed. ‘‘Our sheep are on the other mountain.’’ We walked up and up and then she came to a halt by a friendly rock and gasped, ‘‘I need a magic carpet from Aladdin’’.

Our climb was rewarded by a view over the plains that have seen so much human traffic through the ages – and in the distance the haunting red earth and salt lakes of the Kyzylkum desert.

It was from the delightful Rajahgal – now hastily heading off home – that I heard rumours of Ota Kurgon, the medical facility out in the desert where ladies of a certain age treat their various mysterious liver complaints by imbibing

camel milk. ‘‘And you are absolutely sure of the benefit?’’ I asked on arrival at the facility, which was like a farm, only surrounded by endless dust and a huge number of indignant baby camels.

The ladies seated in the sunshine drank the milk fervently and sometimes mixed with urine (also from the camels, I suppose, though I never did dare ask). 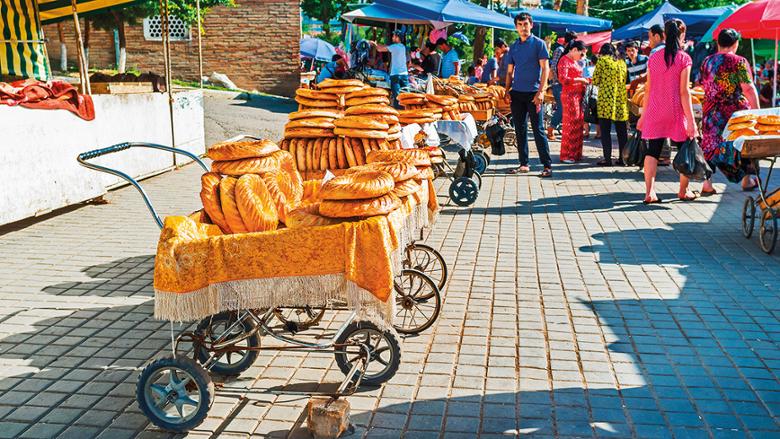 ‘‘Of course,’’ came the unanimous reply, amid much giggling. ‘‘After only three weeks without our husbands, we feel better.’’ Also, it made them young and beautiful again. ‘‘It’s true,’’ I said. ‘‘You lot all look 16!’’

This was greeted with more uproarious laughter, for I’d erred on the generous side.

‘‘But now the mummy camels are coming back from grazing’’, someone exclaimed, and in they came, trotting over the red sands to their young, only to be nuzzled mercilessly. ‘‘They are a blessing,’’ said the oldest patient of them all.

And on that happy note I departed, glad to be another pilgrim of the ancient roadway, pondering the tides of culture that have been and gone, and now fast upon us a new age of the Silk Road as China rises and again a civilisation sweeps through.