The Best Places Around the World to Scuba Dive 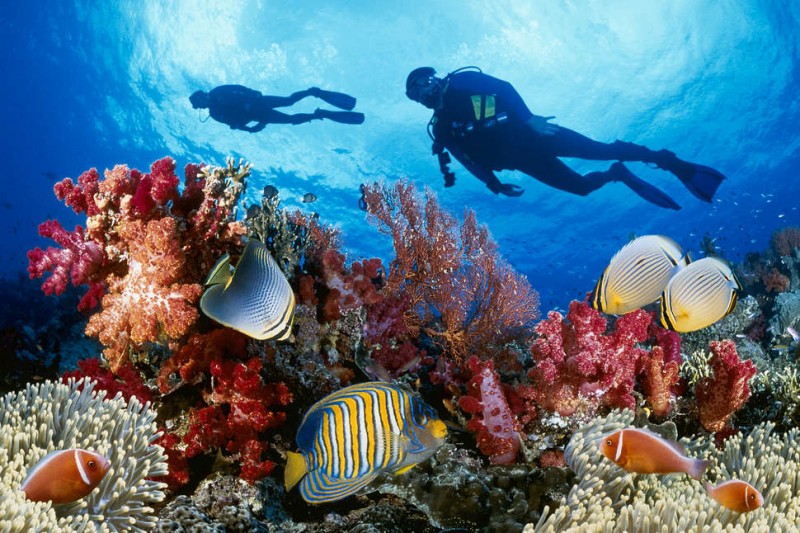 This is cheesy, I know, but diving really does open up a whole new world. In terms of what you can see, of course, but also of what you physically feel. Consider how much more fun your daily life would be if, instead of having to go either left or right to get around stuff in your way, you could also choose up or down. Diving is like flying, just very slowly.

It was unfortunate that I fell so catastrophically in love with scuba diving because as I’ve opted for a career that is not Diving Instructor, I don’t get to do it often. If you have the time and money (less than you think! For both!) to get certified and you’re not yet, I beg of you to let us help.

There are so many exceptional dive sites scattered across the planet. “I’ve worked in many places that divers wouldn’t necessarily think of [as the best]” says long-time National Geographic contributing photographer Brian Skerry, “and they still became my favorites.”

Whether your thing is shipwrecks or sharks or Caribbean reefs where you don’t have to wear a wetsuit because it feels like you’re in bathwater, there’s a dive out there that’s perfect for you. 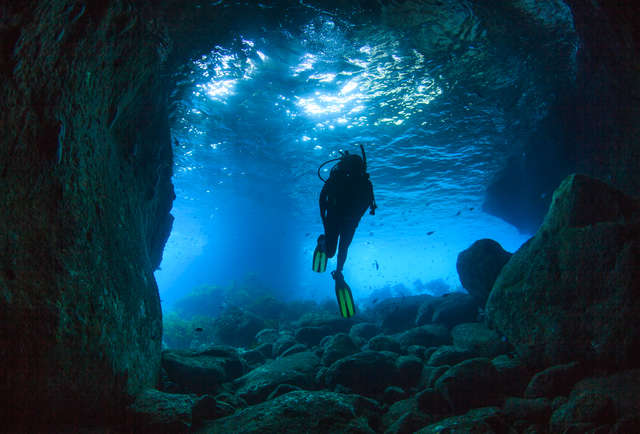 The Poor Knights are a marine reserve and widely considered by veteran divers to be among the top dive locations of any kind, period. You’ll descend through a chasm between underwater cliffs teeming with more than 100 species of fish, plus the signature nudibranchs (a psychedelic-looking mollusk) and some whales and hammerheads in the background if you’re lucky. You’re weaving around jellyfish like you’re in a snowglobe. I swam into a cave where I could take off my mask and breathe the air bubble trapped at the top, which is one of my all-time favorite things.

“Poor Knights is fantastic -- that deep, deep blue water you get in the North Island,” Skerry says. “[New Zealand is] a country that’s had a pretty strong conservation ethic. They created a network of protected marine areas along their coastline and have done a lot to restore ecosystems there. There’s just such a huge variety of habitats.” 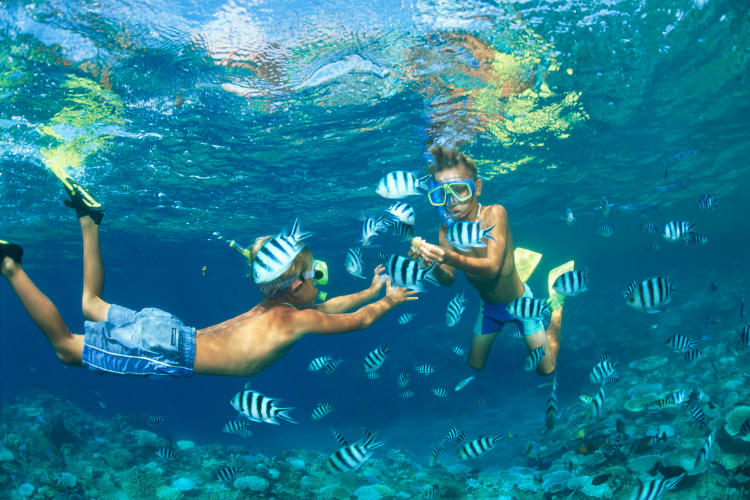 The Line Islands sit on both sides of the equator, and the five on the southern side -- Malden, Starbuck, Vostok, Flint and Caroline (a.k.a. Millennium) -- comprise what’s usually just called “the line.” Coral around the world may be bleaching and dying, but it is thriving here, as you’ll see in the insanely saturated colors when you dive.

“There are places in pretty much any Caribbean island that, if you went in the 1970s or even 1990s, would look vastly different,” Skerry says. “The reefs have been overfished, bleached, there are algae growing because the herbivores are gone… [but] the Southern Line Islands, way out in the Pacific, are just off the charts in terms of pristine coral environments.”

Best dive for those of you who get seasick

I realize this is the internet, but please give me your full attention for just the next 20 seconds or so, because this is important. I’ve met so many people who assumed they could never dive because they get horrifically seasick and/or simply hated boats -- but this is not so! And not even because I have thoughts on how to cure your seasickness, but because you can just take the boat out of the equation entirely.

Shore dives are pretty much what they sound like -- instead of taking a boat out to sea, you gear up on the beach and simply waddle into the water. Of course, most really good dive sites aren’t super close to land… but you have got the USS Liberty, a wrecked cargo ship from World War II, just off the coast of Bali (one of best places to visit in Southeast Asia). The wreck is basically a reef now, covered in corals and sponges and more fish than you’ll ever identify. It’s less than a five-minute swim from the shore and sits at a depth of 20 to 100 feet, which altogether makes it one of the most accessible wreck dives in the world. Which brings us to… 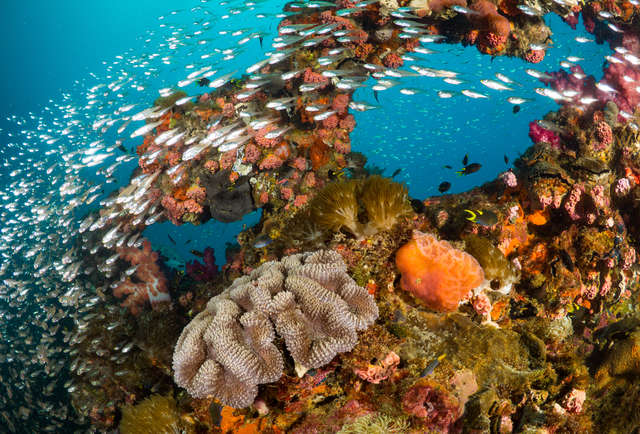 There is nothing quite like a top-shelf wreck dive, and that’s exactly what the SS Yongala is. The ship was tragically lost off the east coast of Australia in 1911, killing all 122 people aboard; the wreck wasn’t discovered until 1958. Today, it’s absolutely crawling with marine life, including bull sharks, tiger sharks, and manta rays.

I will say though, that you’re best off waiting ’til you’ve got at least a bit of mileage in your logbook before tackling wrecks. There are the obvious safety hazards -- small spaces, getting stuck, etc. -- but you’ll also have much more fun if you’ve learned how to fully control your buoyancy. The real joy of wreck diving is that fluidity you feel when you’re wiggling through tiny windows, floating in and out of dark rooms and poking your head into all the nooks and crannies. It’s really fuckin’ cool. 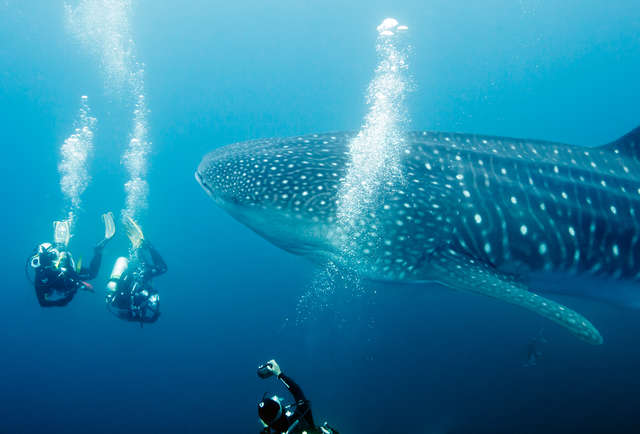 I know what many of you regular readers are thinking, and yes, this article is indeed but a foot soldier in my bid to eventually turn www.thrillist.com into a whale shark fan blog. Let me live.

There are a number of dive sites you could consider the best places to swim with sharks of all shapes and sizes, but we’re going to focus on whale sharks -- they’re the best shape and size anyway.

Go to Isla Mujeres if you want to splash and snorkel around these bus-sized critters, but go to Darwin’s Arch, in the Galapagos, when you want to dive. It’s the only dive site at Darwin Island, and June through December is whale shark season.

“The reality with [photographing] sharks, which I think most folks don’t understand, is that you need to get within a foot or two to really make a great picture,” Skerry says. This usually involves the ethically murky practice of cage diving, but you don’t have to worry about that with whale sharks. They are famously gentle giants, known for passing right up close, and will definitely not eat you.

“Absolutely magnificent,” Skerry recalls of his first time diving with a whale shark back in the ’90s. “It was like being with a dinosaur.”