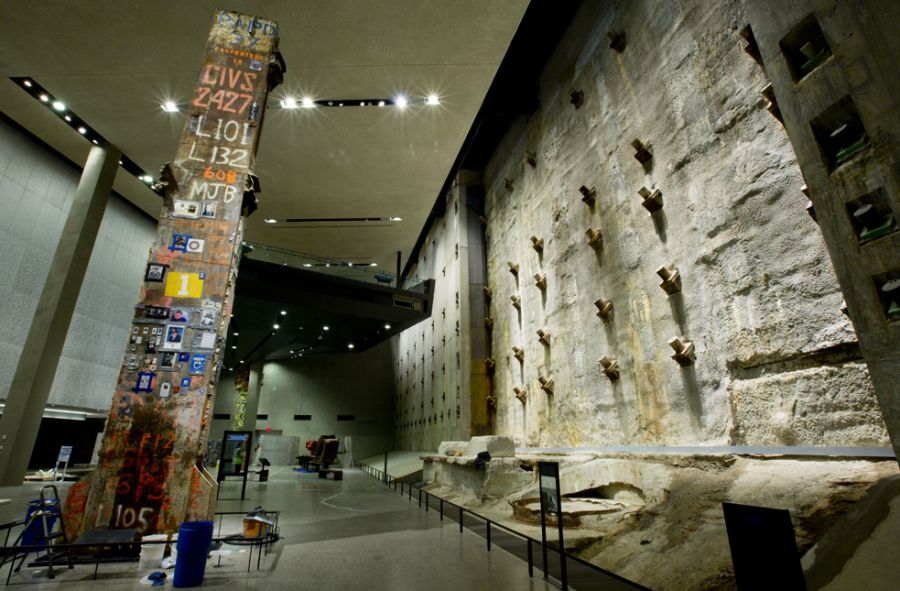 Remember the terrible events of September 11, 2001, when you visit the impressive 9/11 Memorial & Museum. Listen to personal stories about memory and resilience after the terrorist attacks. Book your tickets in advance to take advantage of the Skip the Ticket line.

Skip the ticket line by pre-purchasing your ticket
See artifacts from the devastating attack on the World Trade Centers
Honor the memory of those whose lives were lost
Hear personal stories of remembrance and resilience
View the feature film "Facing Crisis: America Under Attack"
Pay your respects at the twin reflecting pools at the 9/11 Memorial
See the amazing Survivor Tree which survived the terrorist attack
Listen to the free downloadable multilingual audio tour on your own personal device 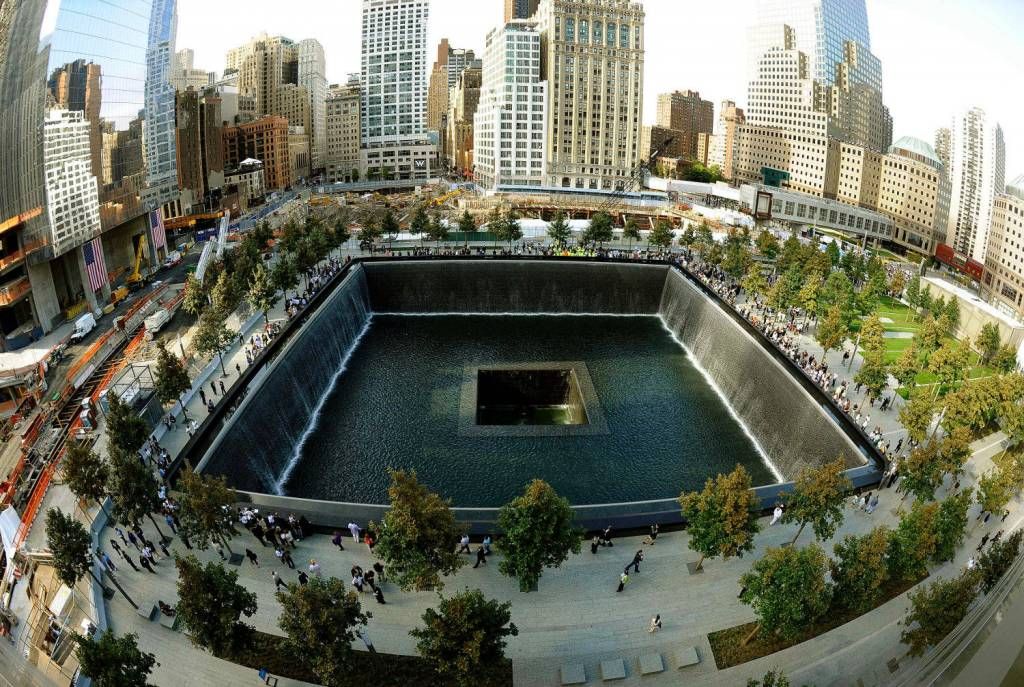 Visit the 9/11 Memorial & Museum and honor all those who lost their lives in the horrific terror attacks on September 11, 2001. Also visit the 9/11 Memorial which remembers and honors the 2,983 people who were killed in the horrific attacks of September 11, 2001 and February 26, 1993.
Skip the ticket line by pre-purchasing your tickets online and proceed directly to the "Ticket Holder” queue at the main entry.
THE 9/11 MUSEUM
The Museum displays over 10,000 monumental artifacts linked to the events of 9/11, while presenting intimate stories of loss, compassion, reckoning, and recovery that are central to telling the story of the 2001 and 1993 attacks, and their aftermaths. It also explores the global impact of 9/11 and its continuing significance.
The Museum is made up of three permanent exhibition sections:
- The Historical Exhibition has three parts: the Day of 9/11, Before 9/11 and After 9/11. It tells the story of what happened on 9/11, including the events at the World Trade Center and the Pentagon and the story of Flight 93. The exhibition explores the background leading up to the events and examines their aftermath and continuing implications.
- The Memorial Exhibition, which is named In Memoriam, commemorates the lives of those who perished on September 11, 2001 and February 26, 1993 and provides visitors with the opportunity to learn about the men, women and children who died.
- The Foundation Hall is a room of massive scale, which houses both the last column and the slurry wall.
The Museum admission also includes entry to 3 feature Films which are repeated throughout the day:
- "Facing Crisis: America Under Attack": Key 9/11 decision makers describe the events of the day.
- "Facing Crisis: A Changed World": World leaders examine 9/11’s impact on global events.
- "Rebirth at Ground Zero": This multi-screen film experience uses time-lapse footage and recorded interviews to present an inspiring first-hand perspective of the transformation and renewal of the World Trade Center site and the uplifting personal journeys of some of those most directly affected by the attacks.
Visitors are welcome to explore the Museum at their own pace. An average visit can take about two hours.

The Memorial’s twin reflecting pools are each nearly an acre in size and feature the largest manmade waterfalls in North America. The pools sit within the footprints where the Twin Towers once stood. The names of every person who died in the 2001 and 1993 attacks are inscribed into bronze panels edging the Memorial pools, a powerful reminder of the largest loss of life resulting from a foreign attack on American soil and the greatest single loss of rescue personnel in American history.

The Memorial is surrounded by Swamp White Oak trees, with the exception of a Callery pear tree became known as the "Survivor Tree". In October 2001, the tree was discovered at Ground Zero severely damaged, with snapped roots and burned and broken branches. The tree was removed from the rubble and after its recovery and rehabilitation, the tree was returned to the Memorial in 2010. New, smooth limbs extended from the gnarled stumps, creating a visible demarcation between the tree’s past and present. Today, the tree stands as a living reminder of resilience, survival and rebirth.

FREE DOWNLOADABLE MULTILINGUAL AUDIO TOUR
Download the 9/11 Museum Audio Guide App onto your own personal device and listen to the 'Witnessing History Tour" which will guide you through the 9/11 Museum. The tour also provides an overview of 9/11 and its aftermath. You’ll hear about the experiences of first responders, recovery workers, family members of those killed on 9/11, journalists, and others with stories to share. This tour is available in English, Chinese, French, German, Italian, Japanese, Portuguese, and Spanish. Free Wifi is available on site and inside the Museum.
Alternatively you can rent an audio device at the Museum for $7. 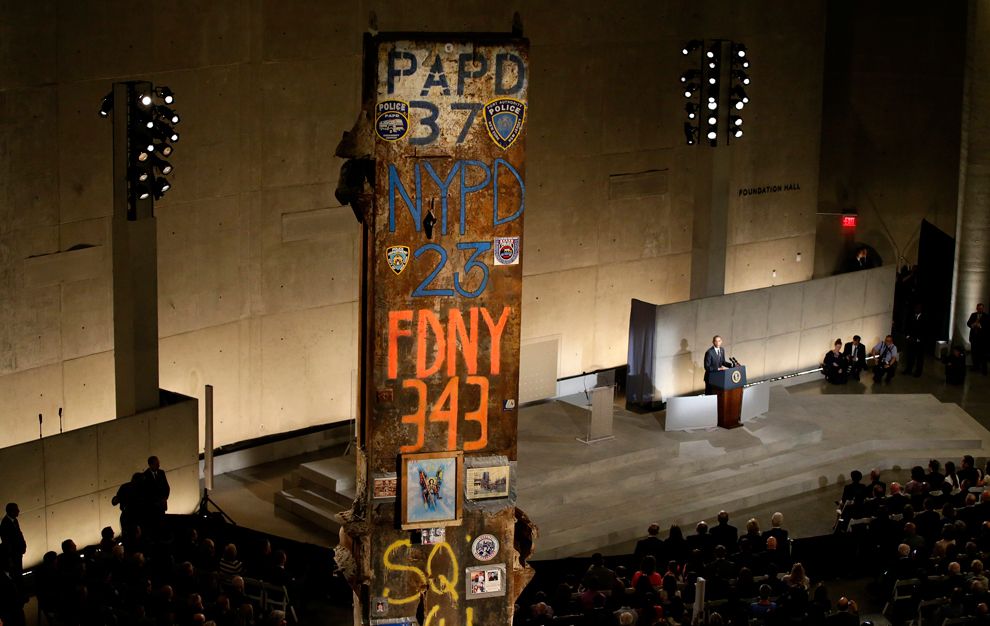