Top 10 Most Dangerous Countries To Visit

The joy of traveling is one of the greatest joys. Witnessing another culture, exploring, and going on adventures in new lands is one of the best ways to experience life. Traveling gives you new eyes to see the world in, and truly expands your knowledge base. I personally look to take every chance I can get to travel. In this day and age, we see people traveling many places on social media and we get curious. However, there are some parts of the world that are just not ready to be seen comfortably.

Read on below to learn the 10 most dangerous places to travel to!

There is an ongoing conflict in Ukraine with Russia. Between the countries, the armed forces are involved with on the ground conflict in the Eastern region, and it is not uncommon for locals to get involved in the conflict.

While the threat in Egypt is declining, it is still not the best time to visit. Terror groups and uprisings still exist, and the threat of attack is never far away. It is gaining safety, but there is no harm in waiting until things settle.

Honduras is located in Central America and has many beautiful sites to see, but perhaps not yet. Honduras has one of the highest murder rates in the world, and is known for its deadly crime.

Rural Kenya is home to many terrorist factions. There are attacks often, and reported bombs and shootings are heard. The cities are usually spared, but it’s best to be safe. The worst times to visit is around election times, where cities are lit in violent protests.

El Salvador, while home to beautiful mountainsides, is also home to violent gang crimes. There have been reported kidnappings in national parks and other public sites. The country has been turmoiled by civil war for many years, and never fully recovered. 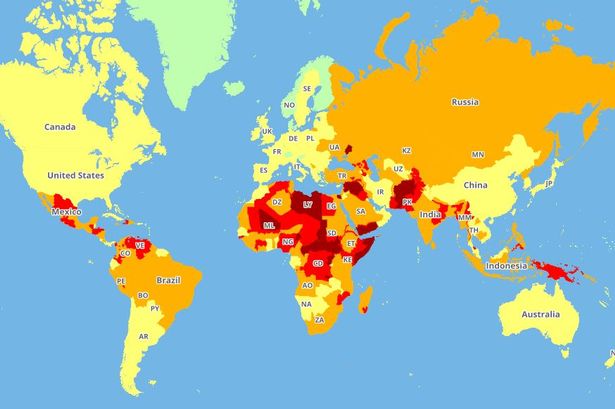 Narcos is a Netflix hit, because of its storytelling expertise and its historical accuracy. Colombia has been ravaged by drug trafficking, political corruption, and violent crimes for over 4 decades. Organized crime is a strong force in the country, and until peace agreements are formed, travel is warned against.

The changing political atmosphere is just downright scary, and right now Venezuela is struggling. The news reports hunger issues, protests, and an overall uncertain situation. There is a growing economic crisis and tensions are rising.

Like many others on this list, Yemen has also been home to many terrorist groups. Rebel groups have been known to detain American and European citizens for political power. There are alternatives in the Middle East, and I would simply skip it.

Ever heard of Boko Haram? Well, it’s a terrorist group that has been ravaging the country for years. Coupled with the fact that transportation is underdeveloped and unreliable, there are multiple warnings against travel in Nigeria.

The Pakistani government and intelligence agencies have a track record of working against the US government. The country is home to many terrorist training camps, including ISIS and the Taliban. I would avoid the area completely.