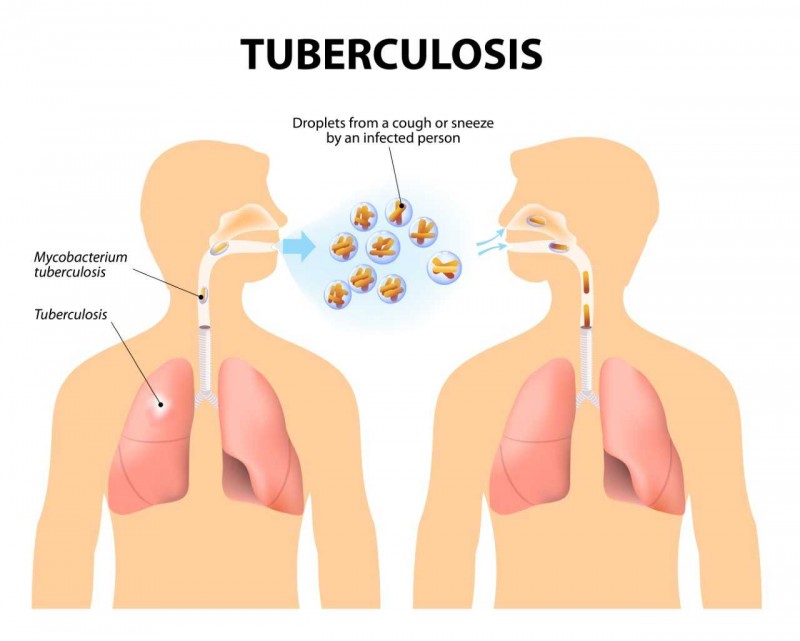 In the 18th and 19th centuries, a tuberculosis epidemic rampaged throughout Europe and North America, before the German microbiologist Robert Koch discovered the microbial causes of tuberculosis in 1882.

Following Koch's discovery, the development of vaccines and effective drug treatment led to the belief that the disease was almost defeated. Indeed, at one point, the United Nations, predicted that tuberculosis (TB) would be eliminated worldwide by 2025.

However, in the mid-1980s, TB cases began to rise worldwide, so much so, that in 1993, the World Health Organization (WHO) declared that TB was a global emergency; the first time that a disease had been labeled as such.

Here are some key points about tuberculosis. More detail and supporting information is in the main article.

Doctors make a distinction between two kinds of tuberculosis infection: latent and active.

Latent TB - the bacteria remain in the body in an inactive state. They cause no symptoms and are not contagious, but they can become active.

Active TB - the bacteria do cause symptoms and can be transmitted to others.

About one-third of the world's population is believed to have latent TB. There is a 10 percent chance of latent TB becoming active, but this risk is much higher in people who have compromised immune systems, i.e., people living with HIV or malnutrition, or people who smoke.

TB affects all age groups and all parts of the world. However, the disease mostly affects young adults and people living in developing countries. In 2012, 80 percent of reported TB cases occurred in just 22 countries. 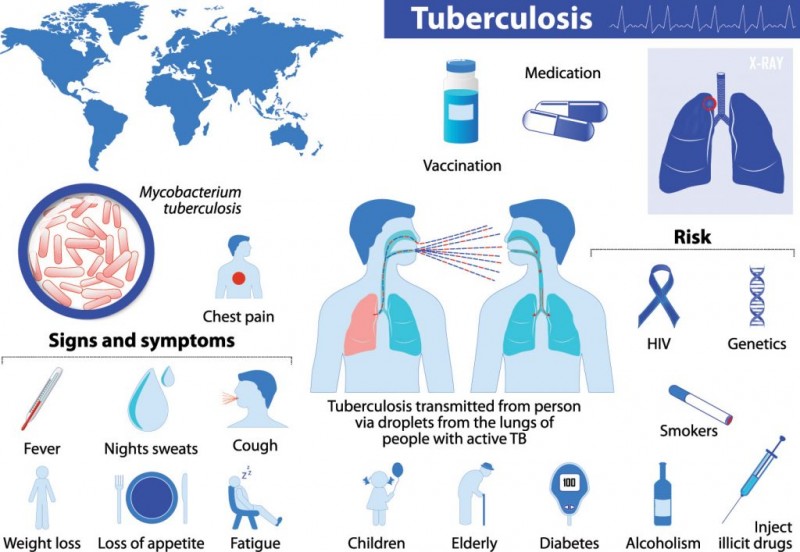 To check for TB, a doctor will use a stethoscope to listen to the lungs and check for swelling in the lymph nodes. They will also ask about symptoms and medical history as well as assessing the individual's risk of exposure to TB.

The most common diagnostic test for TB is a skin test where a small injection of PPD tuberculin, an extract of the TB bacterium, is made just below the inside forearm.

The injection site should be checked after 2-3 days, and, if a hard, red bump has swollen up to a specific size, then it is likely that TB is present.

Unfortunately, the skin test is not 100 percent accurate and has been known to give incorrect positive and negative readings.

However, there are other tests that are available to diagnose TB. Blood tests, chest X-rays, and sputum tests can all be used to test for the presence of TB bacteria and may be used alongside a skin test.

The majority of TB cases can be cured when the right medication is available and administered correctly. The precise type and length of antibiotic treatment depend on a person's age, overall health, potential resistance to drugs, whether the TB is latent or active, and the location of infection (i.e., the lungs, brain, kidneys).

People with latent TB may need just one kind of TB antibiotics, whereas people with active TB (particularly MDR-TB) will often require a prescription of multiple drugs.

Antibiotics are usually required to be taken for a relatively long time. The standard length of time for a course of TB antibiotics is about 6 months.

TB medication can be toxic to the liver, and although side effects are uncommon, when they do occur, they can be quite serious. Potential side effects should be reported to a doctor and include: 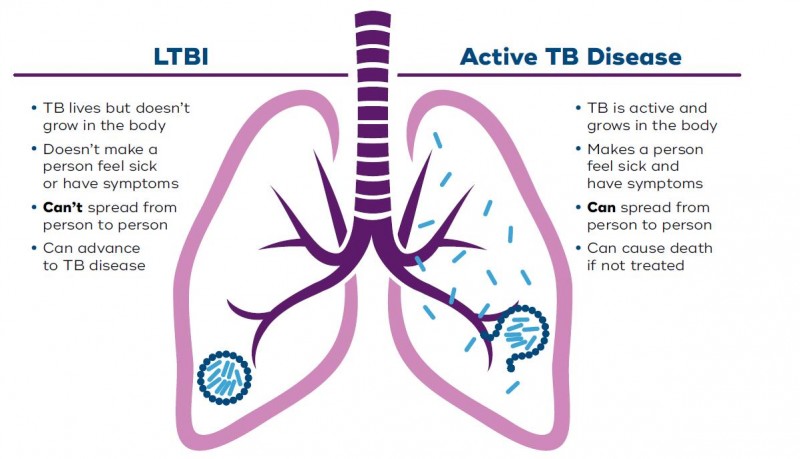 It is important for any course of treatment to be completed fully, even if the TB symptoms have gone away. Any bacteria that have survived the treatment could become resistant to the medication that has been prescribed and could lead to developing MDR-TB in the future.

Directly observed therapy (DOT) may be recommended. This involves a healthcare worker administering the TB medication to ensure that the course of treatment is completed.
What causes tuberculosis?

The Mycobacterium tuberculosis bacterium causes TB. It is spread through the air when a person with TB (whose lungs are affected) coughs, sneezes, spits, laughs, or talks.

TB is contagious, but it is not easy to catch. The chances of catching TB from someone you live or work with are much higher than from a stranger. Most people with active TB who have received appropriate treatment for at least 2 weeks are no longer contagious.

Since antibiotics began to be used to fight TB, some strains have become resistant to drugs. Multidrug-resistant TB (MDR-TB) arises when an antibiotic fails to kill all of the bacteria, with the surviving bacteria developing resistance to that antibiotic and often others at the same time.

MDR-TB is treatable and curable only with the use of very specific anti-TB drugs, which are often limited or not readily available. In 2012, around 450,000 people developed MDR-TB.

A few general measures can be taken to prevent the spread of active TB.

Avoiding other people by not going to school or work, or sleeping in the same room as someone, will help to minimize the risk of germs from reaching anyone else.

Wearing a mask, covering the mouth, and ventilating rooms can also limit the spread of bacteria.

In some countries, BCG injections are given to children to vaccinate them against tuberculosis. It is not recommended for general use in the U.S. because it is not effective in adults, and it can adversely influence the results of skin testing diagnoses.

The most important thing to do is to finish entire courses of medication when they are prescribed. MDR-TB bacteria are far deadlier than regular TB bacteria. Some cases of MDR-TB require extensive courses of chemotherapy, which can be expensive and cause severe adverse drug reactions in patients. 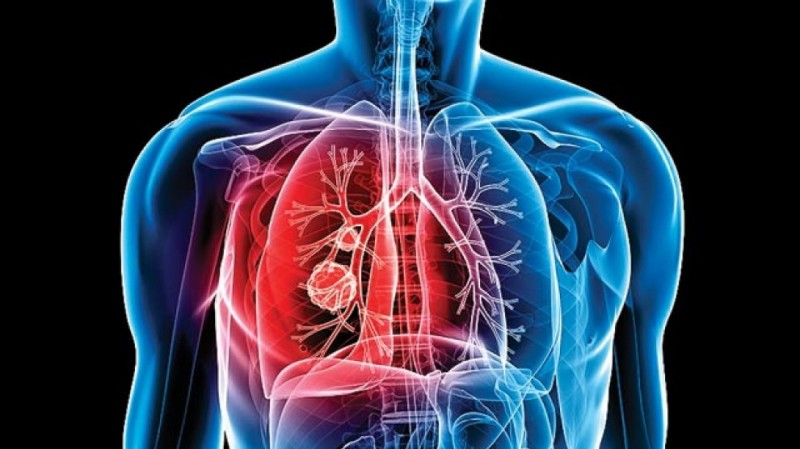 People with compromised immune systems are most at risk of developing active tuberculosis. For instance, HIV suppresses the immune system, making it harder for the body to control TB bacteria. People who are infected with both HIV and TB are around 20-30 percent more likely to develop active TB than those who do not have HIV.

Tobacco use has also been found to increase the risk of developing active TB. About 8 percent of TB cases worldwide are related to smoking.

People with the following conditions have an increased risk:

Also, people who are undergoing cancer therapy, anyone who is very young or old, and people who abuse drugs are more at risk.

Travel to certain countries where TB is more common increases the level of risk, too.

The following countries have the highest TB rates, globally:

If left untreated, TB can be fatal. Although it mostly affects the lungs, it can also spread through the blood, causing complications, such as:

Fortunately, with proper treatment, the vast majority of cases of tuberculosis are curable. Cases of TB have decreased in the United States since 1993, but the disease remains a concern.

Without proper treatment, up to two-thirds of people ill with tuberculosis will die.