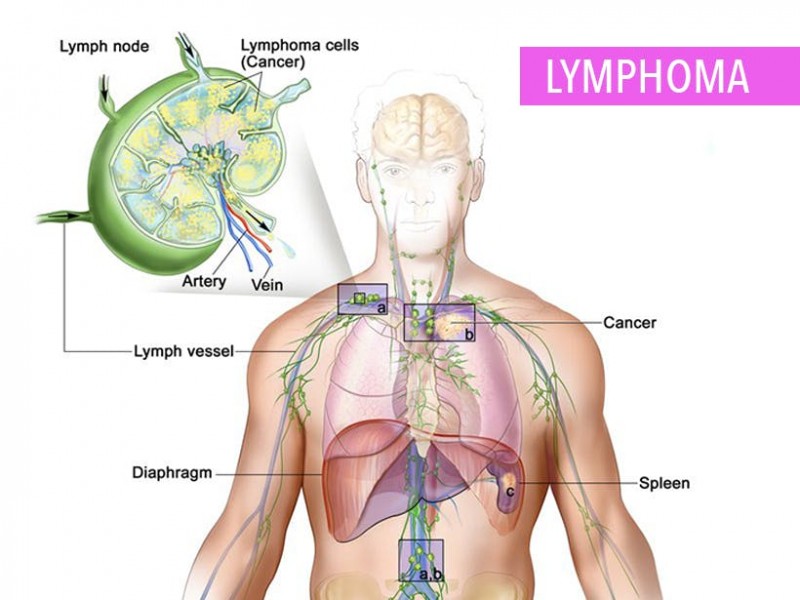 Lymphoma is a cancer of the lymphatic system. It affects a type of white blood cells known as lymphocytes. These help fight disease in the body. They play an important role in the immune system.

This type of cancer starts in the white blood cells, or lymphocytes. As it is present in the bloodstream, it can spread, or metastasize, to different parts of the body.

Lymphoma can occur at any age, but it is one of the most common causes of cancer in children and young adults aged 15 to 24 years. It is often treatable.

Here are some key points about lymphoma. More detail is in the body of this article.

Treatment depends on the type of lymphoma and the stage it has reached.

Indolent, or slow-growing lymphoma may need only watchful waiting and no treatment.

If treatment is necessary, it can involve:

Surgery is used more often for obtaining a biopsy.

The signs and symptoms of lymphoma are similar to those of illnesses such as viral diseases and the common cold, but they continue for longer than would normally be expected.

Some people will have no symptoms, but some may notice a swelling of the lymph nodes. These are located all around the body, often in the neck, groin, abdomen, or armpits.

The swellings are normally painless, but pain may occur if the enlarged glands press on organs, bones, and other structures. This can be confused with back pain.

Lymph nodes can swell during common infections, such as a cold, but in lymphoma the swelling does not go away. Pain is also more likely to accompany the swelling if it is due to an infection.

The overlap of symptoms can lead to misdiagnosis.

Anyone who has ongoing swelling of the glands should see their doctor.

Other symptoms of both types of lymphoma may include:

Additional symptoms that can indicate Non-Hodgkin lymphoma include:

Pain, weakness, paralysis, or otherwise altered sensation can occur if an enlarged lymph node presses against spinal nerves or the spinal cord. 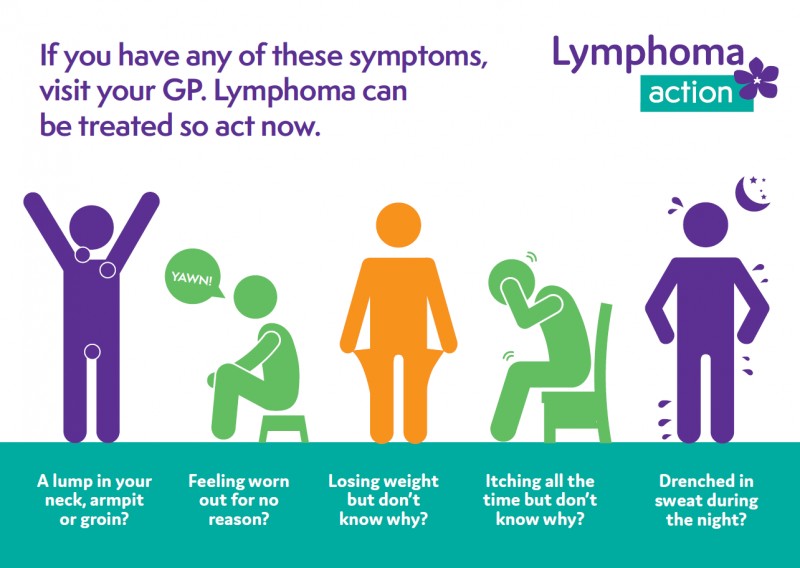 Lymphoma can spread rapidly from the lymph nodes to other parts of the body through the lymphatic system. As cancerous lymphocytes spread into other tissues, the body's ability to fight infection weakens.

Cancer happens when there is uncontrolled growth of abnormal cells that thrive and spread instead of dying as they would in the life cycle of a normal cell.

Lymphatic tissue is connected throughout the body. If cancer cells develop in the lymphatic system, they can spread easily from their original location to other tissues and organs, including those outside the system.

Lymphoma most often spreads to the liver, bone marrow, or lungs.

In Hodgkin lymphoma, the cancer usually affects one lymph node after another in order.

In non-Hodgkin lymphoma, tumors may arise in disparate lymph nodes, skipping some nodes.

Exactly what causes lymphoma is unclear, but there are some risk factors.

The two different types of lymphoma have different risk factors.

Risk factors for non-Hodgkin lymphoma include:

Risk factors for Hodgkin lymphoma include: 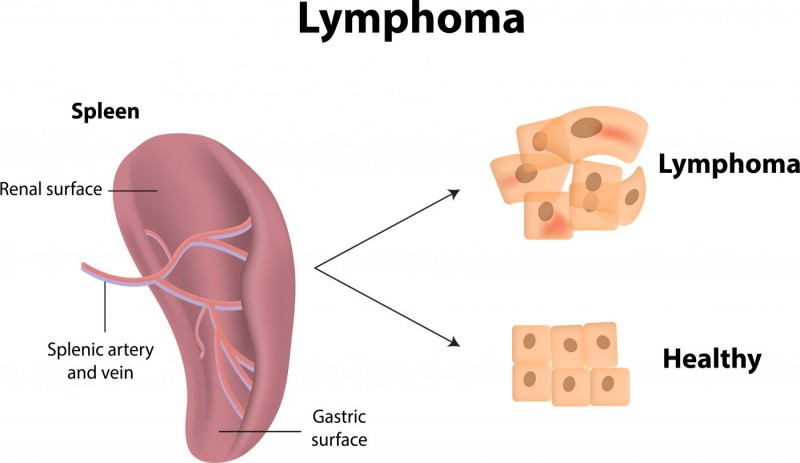 There are no routine screenings for lymphoma. If a person has persistent viral symptoms, they should see a doctor.

The doctor will ask about the patient's personal and family medical history, and try to rule out other conditions.

They will also carry out a physical examination, including an inspection of the abdomen and chin, neck, groin, and armpits, where swellings may occur. The doctor will look out for signs of infection near lymph nodes, since this can account for most cases of swelling.

Tests will confirm whether lymphoma is present.

Blood tests and biopsies can detect the presence of lymphoma and distinguish between them.

A biopsy involves taking a sample of lymph tissue for examination in a laboratory. The surgeon may remove a whole lymph or a part of one. In some cases, a needle can be used to take a tissue sample. A bone marrow biopsy may be necessary. This may need a local anesthetic, a sedative, or a general anesthetic.

Biopsies and other tests can confirm the stage of the cancer, to see whether it has spread to other parts of the body.

Imaging tests such as a CT or MRI scan, X-ray imaging of the chest, abdomen, and pelvis, ultrasound scanning, or a PET scan.

A spinal tap, where a long, thin needle is used under local anesthetic to remove and test spinal fluid.

Staging of the cancer depends on the type, growth rate, and cellular characteristics. In stage 0 or I, the cancer is confined to a small area. In stage 4, it has spread to more distant organs.

Lymphoma can also be described as indolent, limited to one place, or aggressive, spreading to other parts of the body.

Lymphatic cancers are classified by the type of immune cells affected. The two main types are Hodgkin and non-Hodgkin. Within these, there are many subtypes.

Non-Hodgkin, the most common type, affects B and T cells. It accounts for 90 percent of lymphoma cases and around 4 percent of all cancers in the U.S.

Classic Hodgkin lymphoma is marked by the presence of cells known as Reed-Sternberg cells. Other subtypes affect different types of cells.

With treatment, more than 2 in 3 people diagnosed with stage I non-Hodgkin lymphoma will survive for at least 5 years.

With stage I Hodgkin lymphoma, just over 85 percent of people who receive treatment will survive for at least 5 years.

It is important to seek medical attention for unusual signs and symptoms, as these can lead to an early diagnosis and a good chance of successful treatment.