How Are Diabetes And Hypertension Linked? 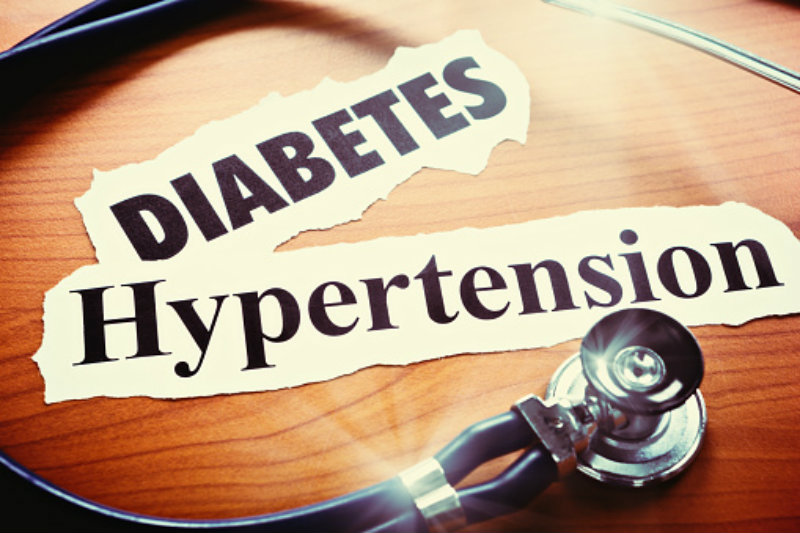 The American Diabetes Association reports that from 2000 to 2012, 71 percent of adults with diabetes had a blood pressure of greater or equal to 140/90 or were taking medications to help normalize blood pressure.

Many people with diabetes also have hypertension, or high blood pressure. Having these conditions together can make them both worse.

Known the "silent killer," hypertension usually has no signs or symptoms and many people are not aware they have it.

Blood pressure is measured in millimeters of mercury (mm Hg) and can be assessed using a blood pressure monitor.

Any blood pressure reading of less than or equal to 119/79 is considered normal.

A reading between 120 and 139 for systolic pressure and between 80 and 89 for diastolic pressure is considered prehypertension. This is a sign of possible hypertension if a person does not take preventive steps.

A doctor will diagnose a reading of 140/90 mm Hg or higher as high blood pressure.

People can control hypertension with healthy lifestyle habits. These can include exercise and a low-fat, low-sodium diet. If necessary, a person with hypertension may reduce their blood pressure using medication.

Diabetes occurs when blood sugar increases because the body cannot use the glucose properly. This happens when there a problem with insulin levels in the blood. There are two different types of diabetes. Insulin makes it possible for body cells to absorb glucose.

Type 1 diabetes accounts for about 5 percent of diabetes cases, according to the American Diabetes Association (ADA).

Type 1 diabetes occurs when the body does not produce enough insulin. With the help of insulin therapy, anyone can learn to manage and live with type 1 diabetes. Symptoms include increased thirst, frequent urination, fatigue, blurred vision, and increased hunger.

According to the ADA, type 2 diabetes accounts for at least 90 percent of all diagnosed cases of diabetes. Risk factors are family history, prior gestational diabetes during pregnancy, impaired glucose intolerance, lack of exercise, and being overweight.

Some ethnic groups are at a higher risk of type 2 diabetes, including African Americans, Hispanics and Latinos, and Native Americans.

Symptoms are similar to those of type 1 diabetes, but some patients may not have symptoms until their blood sugar levels reach dangerous levels. Treatment for type 2 diabetes involves diet changes, increasing physical activity, blood glucose monitoring, and oral medication or insulin injections. 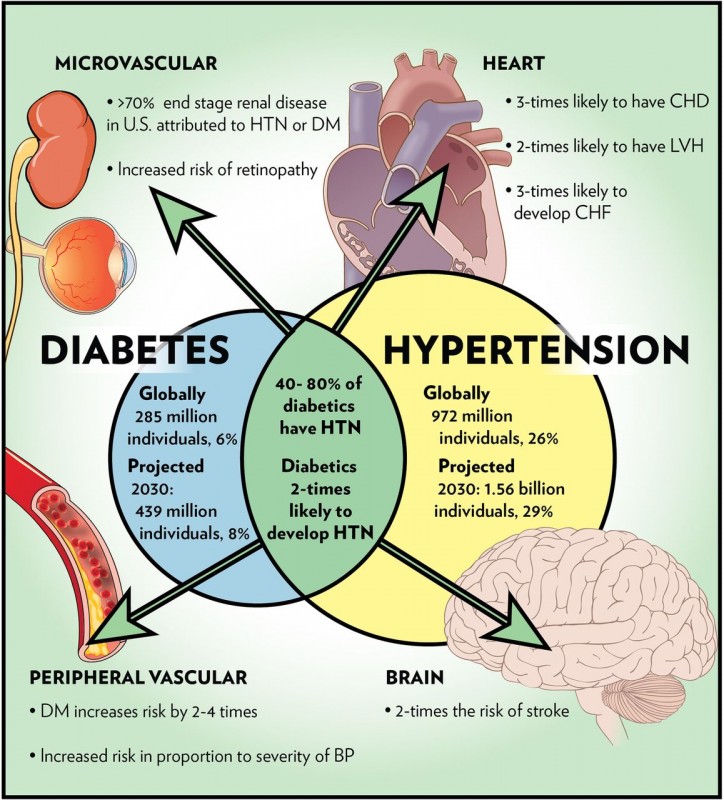 What is the link?

Studies have found that at least 1 in 3 patients with type 1 diabetes also have hypertension.

When hypertension and diabetes co-exist, the effects of one disease tend to make the other worse. This makes for a deadly combination.

Diabetes does three things that may increase blood pressure:

Hypertension and diabetes generally coexist because they share similar risk factors, including being overweight, following an unhealthy diet, and living an inactive lifestyle.

Patients should report any consistent blood pressure readings of 140/90 or higher to their doctors, as these may result in complications.

The combination of hypertension and diabetes can be lethal, and together they can increase the risk of a heart attack or stroke. Having both conditions also increases the risk of kidney disease and problems the blood vessels of the eyes, which could lead to blindness.

Uncontrolled diabetes is not the only risk factor for hypertension. The chances of having a heart attack or stroke are further multiplied if other risk factors exist, in addition to diabetes.

People with diabetes should try to minimize these risks as far as possible, for example, by choosing a healthy lifestyle. 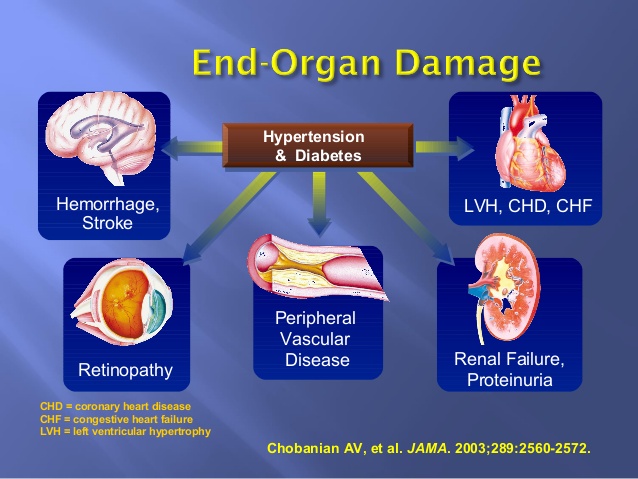 Lifestyle factors are the best way to lower the risk of high blood pressure and to maintain normal levels. There is a wide body of evidence, which demonstrates that controlling blood pressure in people with diabetes reduces the risk of complications.

A study in the United Kingdom (U.K.) followed 1,148 people with diabetes for several years. The participants whose blood pressure was well-controlled had a significantly reduced risk of dying from complications related to diabetes, hypertension, or both.

Losing even a small amount of weight can make a difference in bringing down blood pressure.

The National Heart Lung and Blood Institute (NHLBI) points out that losing 10 pounds in weight can reduce blood pressure.

People who live with both hypertension and diabetes should try to be active at least five days a week for at least 30 minutes per day. Regular activity lowers blood pressure and offers many other health benefits.

People with diabetes should already be closely monitoring their diet in order to maintain blood sugar. They should also limit the amount of salt in cooking and avoid adding salt to food to help maintain blood pressure.

The intake of too much alcohol leads to increased blood pressure. Reducing heavy drinking to the recommended amounts of alcohol decreases the risk of hypertension.

Nicotine in cigarettes raises blood pressure and heart rate. It also adds stress to the heart and increases the risk of heart attack and stroke.

Smokers with diabetes have a higher risk of serious complications, including:

People who smoke should make every effort to stop.

Blood pressure medication is recommended if blood pressure consistently remains above 140/90 for people with diabetes, despite lifestyle changes.

Most people with hypertension will need to keep taking blood pressure medication for the rest of their lives.

The only exception would be for someone who blood pressure has been well controlled for significant period of time due to major lifestyle changes, such as losing a lot of weight, being consistently active or after a significant reduction in alcohol consumption.